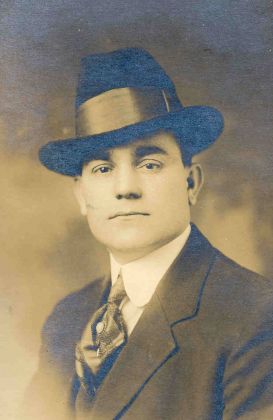 The story of Vancouver police detective Joe Ricci reads like a Mickey Spillane novel: intrigue, shootings, killings, drugs and prostitutes. In the process, he is remembered as a law-enforcement officer who pushed the rules to the limit in order to take down a criminal.

The year is 1912, six years following Joe Ricci’s arrival from Falvaterra, a town southeast of Rome. Giuseppe Ricci is at the Vancouver police station demanding to know what progress has been made in apprehending the thief who stole his coat. “Look Mr. Ricci, I’ve told you before. We’re doing our best to get your coat back,” replied the desk sergeant. “But hey, if you think you can do a better job, why don’t you join the force and put your cheek where your mouth is?”

Within weeks the 24-year old railroad worker made an application for a position on the police force. The recruitment officer, ever searching for a candidate who could assist in dealing with the nefarious and elusive members of the local Italian mano nera, knew instinctively he had found his man. Ricci’s cold piercing eyes, aggressive attitude, brawler’s physique and self-confidence separated him from the other applicants. Moreover, his capability as a translator and his knowledge of the clandestine movements and operations of some of the Italian bootleggers, pimps and petty criminals in Vancouver’s Little Italy area eminently qualified him for the job. He was hired immediately for the fast-action work of a sleuth with Vancouver’s finest.

Over the next 16 years, Ricci and his partner, Detective Alex Sinclair, regularly were front page news. They were the most widely known plainclothes cops on the force, and were involved in all of the city’s high profile drug seizures and arrests. Their beats were Vancouver’s Chinatown and Little Italy, where pursuing criminals was a daily occurrence. Ricci, at 5-foot 8, and 150 pounds, carried a sledgehammer punch that became imprinted on the faces of scores of criminals who dared challenge him. Although he was shot at, punched, wrestled to the ground and confronted by knife-wielding thugs, the only scars that he bore were disfiguring thumb knuckle bone fractures.

Once, in 1916, Detective Ricci was trapped with Detective Sinclair in a narrow hallway while raiding a Chinese opium den in Shanghai Alley. They narrowly escaped a blazing death when one of the occupants tossed an opium lamp at them. They were trapped, but for Sinclair, who with strength and quick thinking, managed to hack his way through the casing of the wall with an axe, before smoke and fire could consume the two men. In aiding him, Ricci sustained an ugly gash in his right forearm and sprained an ankle.

A newspaper headline read: “Detectives Joe Ricci and Alex Sinclair, anti-narcotics experts, captured a Chinese man and a white woman for the possession of drugs. They then invaded an opium den and grabbed two Orientals and successfully rounded up a gang of eight white and two Chinese gamblers.”

An item from 1919 read: “Refusing to halt after several warnings, Joseph Orchard Ebanka, a black man wanted on a charge of burglary, was shot through both thighs by Detective Joe Ricci. The man broke away from Sinclair and Ricci while the detectives were searching him. Ebanka was shot as he ran down the street 50 feet away from Ricci, who had fired a warning shot and shouted at him to stop.”

A 1925 newspaper story began as follows: “Guns for Chinese Seized. Ricci and Sinclair were among the detectives who swooped down on a house occupied by a Chinese family. The twenty-four weapons seized were believed destined for warring factions in China.” Another 1925 newspaper headline read: “Punciello Accused of Slaying of Massachusetts Politicians.” It continued, “Succeeding where combined police forces of the United States failed after a two year search, Detectives J. Ricci and D. Alex Sinclair have arrested Gabrielle Punciello, alias Raffaelo De Pasquale, wanted in Boston, Mass., on a charge of first degree murder. The arrest results from Ricci’s close observation of the Vancouver Italian colony, where it was noted that Italian gunmen were on their way to Vancouver with the intention of staging a bank robbery.”

But it was the case of Domenico Delfino, a lieutenant in the mano nera, that was the highlight of Ricci’s incredible career. By 1923, the investigation had been ongoing for nearly six years before Ricci became involved. Delfino’s escape in 1918 from Pennsylvania’s Lakawanna County Jail had been one of the most spectacular in history. While waiting to be transferred to New York for execution, Delfino somehow secured a saw and gun. As he made good on his bid for freedom, the convicted murderer killed four guards, eventually finding his way to Vancouver. With tips from his Italian contacts, Ricci successfully apprehended Delfino in Nelson, BC. The desperado subsequently was deported to the US where he was executed.

During the 1920s, Ricci and Sinclair accounted for the seizure of over $500,000 worth drugs (an astronomical sum in those days), while policing their Chinatown beat. On one occasion, Ricci found himself caught between rival tong groups who fought, yelled, bit, and scratched one another in the middle of Pender Street. The authorities finally regained control and ended the free-for-all with scores of Chinese herded into police paddy wagons and sent off to jail for the night.

Ricci’s closest call came quite early in his career. After extensive surveillance and preparation, he and Sinclair were close to apprehending a real desperado; Robert (Bob) Tait was described by the press as a crazed black man, drug addict, and killer of a ten year old boy. The drama, which unfolded in March 1917, began with Ricci and his partner requisitioning policemen, arms and axes from Police Chief M.B. MacLennan for use in storming the premises where Bob Tait and his mole “Frankie” Russell were holed up. Instead, Chief MacLennan decided that he would lead the team in apprehending Tait. Ricci cautioned the chief to leave the operation to younger detectives such as himself. Sadly, this was not the case.

Ricci, the chief, and several other detectives made up the advance group. They entered the premises at 522 East Georgia Street and paused in the hallway. Tait was in the kitchen. He had a loaded shotgun and had warned he would use it if the police attempted to enter. As soon as the chief stepped out of the entrance hallway, he got the full shotgun blast in the face, killing him on the spot. Ricci crawled along the floor, grabbed MacLennan’s ankle and dragged him along the hallway and out of the house into a waiting police car. When Ricci re-entered the house, he found Tait lying dead on the floor in a pool of blood. He had been shot in the head.

As in the case of detective icon Frank Serpico, over time Joe Ricci ruffled a few too many feathers due to his strict enforcement of the law. One day he was suspended, and when push came to shove, Ricci found himself on the outside looking in. The much-lamented decision by the newly appointed Chief Constable Bingham late of Calgary saw Ricci forced to resign an unsung hero.

An excerpt from The Canadian Police Gazette circa 1928 reads: “Whether the Vancouver police force wants to have Ricci back, or whether Joe wants to go back, of course, we have no idea. But we will again reiterate the fact that when Ricci came on the job he was the first man who ever stepped into the Italian colony here and stopped a large amount of lawlessness, even though he knew at times that his life was threatened while doing so. Joe Ricci certainly knew his business and was not afraid to do his duty. Which is a whole lot more than can be said for some of the men who considered themselves better policemen than Ricci was.”

Following retirement from detective work, the gutsy Ricci bought the Royal Hotel beer parlour franchise which he operated for 11 years. During this time, he married, and with his wife Germaine raised two daughters, Rosemarie and Louise. In 1948 he returned to the metaphorical scene of the crime by opening the West Coast Central Club on 338 Main Street, adjacent to the police station. The members-only clientele included many of his old pals and acquaintances among the detectives, patrolmen, judges, lawyers and a number of reformed bad guys. It felt like old times! A year later, he was appointed as the official Italian interpreter in the Police Court. No doubt, he viewed this as clearing any lingering misapprehension as to his worthiness as a member of the VPD detective unit.

In the early 1960s, Joe had a stroke causing his daughter Louise to step into the breech and manage the club. Vancouver’s first Italian detective turned club owner died in December 1966, a proud and legendary figure whose crime-fighting exploits continue to amaze.