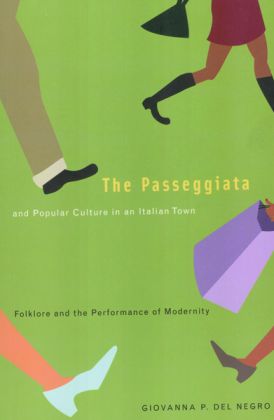 In The Passeggiata and Popular Culture in an Italian Town: Folklore and the Performance of Modernity (Montreal: McGill-Queen’s University Press, 2004. 183 pp), Giovanna P. Del Negro undertakes a thorough and engaging ethnographic analysis of the tradition of the passeggiata or evening stroll in Italian society. Having spent a year doing fieldwork in the fictitiously-named Abruzzo town of Sasso, Del Negro unpacks the complex rules, rituals, and codified performances of the passeggiata which is, according to the author, “the main arena for the performance of the modern self – in both its Enlightenment and its consumerist incarnations… Sassani creatively experiment with clothing and style to forge new identities and explore the meanings of gender, class, and generation.”

The book provides a social, cultural, and political portrait of the Abruzzo region and of Sasso in particular, including the question of the mezzogiorno, organized crime, the Second World War, and outmigration. Sasso is seen by its residents as la piccola Parigi dell’Abruzzo, for it combines the most desirable aspects of tradition with the individual freedoms of modernity. Del Negro proceeds with a detailed analysis of the cultural geography of the town piazza, construed as a collective social body with its “capo” being the church which dominates the square and the lower half of the piazza being the “quart da peda,” or foot of square. These bodily metaphors “help Sassani navigate the piazza in socially acceptable ways.”

The passeggiata therefore demands carefully coded and gender-specific “bodily preparation,” vestment, and demeanour, and Del Negro shows how the piazza is used and appropriated differently by each gender, class, and age group.

If the passeggiata is understood by the townspeople as a leisurely stroll which enables embodied forms of social interaction, it also functions to police behaviours in public spaces. This is done not only through the power of the gaze, but through the codified rules which assign to individuals a particular type of embodied public “performance.” In this way, Sassani “labour to achieve an even performance every time by walking the tight rope between spontaneity and formality.” While Del Negro touches upon (middle) class and race, she does not explicitly address how racial others, foreigners, and the poor are constructed and policed during the ritual of the passeggiata. This would have proved both interesting and timely, given the recent immigration of visible minorities in Italy and the racial debates it has engendered about the nature of Italian society.

Other sections of the book address modernity in terms of other forms of folklore and popular culture, including postcards depicting the town to tourists and returning immigrants alike, organized competitions in which teams compete in events involving both physical strength and cultural knowledge, television programs, and political scandals. Del Negro shows how, through these various forms of social discourse, the residents of Sasso construct a particular image of themselves while touching upon issues as diverse as gender relations, globalization, and sexual politics. Through these discourses, “Sassani represent their town as a modern one, a place that has combined the best of small-town living with the best of the modern urban experience.” While Del Negro’s forays into these other aspects of the popular culture of Sasso prove both interesting and illuminating, her remarkable ability to dissect the embodied spectacle of public space leaves the reader wishing she had expanded further upon this aspect of her analysis.

Domenic A. Beneventi is a post-doctoral fellow in the Department of Literature and Communications at the Université de Sherbrooke.