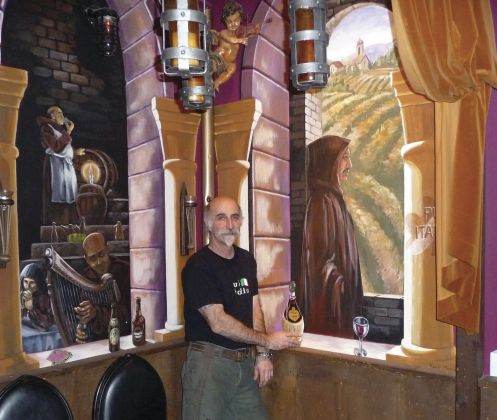 A tall moustachioed figure slides into the bench before me. Setting down a tall pint of Guinness and a flagon of Belgian ale, he says, “Ciao,” and extends his hand. “I’m Joe.” Belgian Ale? Guinness? A pub? In the heart of Ottawa’s Little Italy? Welcome to Pub Italia, an icon on the Preston Street strip. Resembling more a medieval abbey than a local drinking establishment, Pub Italia is the unique creation of Joe Cotroneo.

“I always said that I was in the wrong line of work,” the former journeyman electrician confesses. “So one day I simply hung up my tools and decided to mull life’s mystery.”

A visit to Boston and the purchase of a T-shirt at an ethnic festival would alter the future pub owner’s destiny. “The shirt featured an Italian and an Irish flag crisscrossed on its front with the words: 50% Italian, 50% Irish, 100% Perfect!” The similarity of the flags’ colours, plus the fact that his wife was Irish, consolidated a burgeoning dream.

“I’ve always been involved, in one way or another, with the Preston Street area. I grew up on this street. I was naturally interested in preserving its space as part of the Italian community of Ottawa. The idea of creating an Italian pub intrigued me because no one had ever heard of an Italian pub. This gave me a chance to create something unique. The addition of my wife’s Irish half simply made the dream even grander.”

Now, anyone who has been to Britain knows that pubs are the traditional heart of the community in villages and towns. But the pub’s origins are surprisingly Italian. Long before the Isles caught the eye of the Caesars, Roman tabernae served food and wine to the locals and were known for their bawdy manners. Travellers used roadside tabernae as a stopping place along the extensive road network on the Italian peninsula. Over time, invaders came and went; but one thing all had in common was a fondness for the hearty food and robust drink served by the tabernae waiters. By the time the Romans left the British Isles, the Saxons had adopted the custom of turning cottages into what came to be known as ale houses.

An early association between the Catholic Church and ale-serving establishments occurs in the tenth century. As the faithful were encouraged to visit the growing number of cathedrals rising in Europe, taverns became statutory stopping posts for travel-weary, throat-parched, and morally inspired pilgrims. This, along with burgeoning commerce, spurred an already flourishing public house trade to augment its profitability by also providing room and board for fatigued travellers. These pubs, also referred to as inns, were often located near monasteries that had heretofore provided shelter for pilgrims but were now dreadfully overcrowded.

A further connection with the Church came with the guild workers who were hired by the local prelates to build their cathedrals. These workers were housed in Church-owned inns, usually run by monks. The enriched spirituality of the place served ale (and religion) on tap. Many of these legendary medieval pubs remain to this day, and have names linked to Christianity – Cross Keys, The Lion and Lamb, The Mitre, The Three Crowns.

Two thousand years later, enter Joe Cotroneo. Mixing the historical Irish thirst for ale and the Italian passion for wine and food, Pub Italia was born. The combination is both historical and interesting, if not amusingly logical. Pub Italia is indeed a good place to quaff beers and savour wines. There is a romantic, medieval, Christian atmosphere to the interior. Customers sit in highbacked stalls that are reminiscent of monastic intimacy, and create intriguing little eating areas. Like a master guildsman, Joe is meticulous in the selection and placement of decor. Stations of the Cross adorn the walls, a reminder of life’s travail; stained glass figures beckon chaste thoughts; rough-hewn and heavy wooden beams visually link the interior to its rustic origins.

The Abbey next door provides a further link to a remote past and also provides a pleasant courtyard setting to enjoy a round or two beneath the image of a singing choir boy. Formerly a bakery, the Abbey is separated from the main building by a 12-foot driveway. The building was completely renovated to maximize the monastic atmosphere of the pub. The driveway became an internal courtyard. A loggia-style passage links the two buildings. It is adorned with murals and frescoes, by Karole Maroise, depicting the Garden of Eden. This sylvan passage leads to two doors of heavenly respite (washrooms) appropriately labelled Adam and Eve.

But Joe is also conscious of the pub’s location, situated as it is in the heart of the Italian community, and historically significant as the repository of the community’s memories. Prominently displayed in the pub are murals of his grandparents. Painted by Maroise, the first depicts his mother’s parents, Grazia and Giuseppe Palermo, in stoic nineteenth century pose. They stand before the small village of Santa Lucia in southern Calabria. The second is of his paternal grandfather, Pasquale Cotroneo. He sits, appropriately enough, in a tiny bar in Santa Lucia wearing hunting boots, jacket, and fedora. Both murals signal the owner’s love for his own ancestral roots and his fervent desire to impart that love to his customers.

This passion extends to the meticulous selection of the establishment’s liquid offerings. The menu lists over 200 beers and 36 draft taps from a truly international brew list. These include selections from micro breweries, Abbey beers, Trappist beers, German, Polish, Ukrainian, Czech, Slovak, Belgian, and French beers, to name a few. There is a wide selection of fruit beers featuring cherry, strawberry, peach, apple, and raspberry. If caffeine is your forte, try the coffee beer. Or how about a triple-fermented artisan beer named Panil from Torrechiara, Italy, (boasting a deep, cloudy, cherry-mahogany colour with a strong wine-like viney aroma). As expected, beers from Italy abound. Joe is proud to be the first, perhaps the only one, to carry Pedavena beer, brewed since 1987 at the base of the Dolomites. The wine list is equally impressive, even for the most discerning of wine adventurers.

A steadily improving streetscape is re-seeding Preston Street with traces of the village quality that once defined the area. New decorative lighting, street benches, a piazza, murals, and a defining portal-archway are an invitation to the increasing pedestrian traffic. Most of the Italians may be gone, but there is still a little bit of Italy in the restaurants, cafes, and shops that animate the landscape. Pub Italia is an essential hub of the street’s future, providing an animated and exceptionally crafted social gathering place offering high quality food, a full-service bar, and an upscale casual environment. All this while maintaining a felicitous cross between Italian style, Irish informality…and Christian morality.