The east side of the Ottawa Preston Street Mural

Ottawa’s Preston Street developed its Italian-Canadian identity well before the 1950s, when the bulk of Italian immigration began. More importantly, in direct counterpoint to what some believe, the area has maintained and consolidated its identity in a process of settlement and redevelopment that gives it energy, strength, and authentic character. Preston Street today is not only renewing its visual landscape but also reshaping itself to hopefully better reflect and serve an evolving Italian-Canadian community that has moved away from its humble origins but has not lost its original ethnic flavour.

Highway 417 Mural
The massive mural beneath the Highway 417 viaduct is the brainchild of Joe Cotroneo, owner of Pub Italia, one of the more popular, if not most unique establishment on Preston Street. Joe is a long-time resident of the area, an innovative businessman and a leading area promotor. The idea of a neighbourhood improvement project that celebrates the lives of Italian immigrants in paintings is an extension of Joe’s conception of the street as a pedestrian centre of Italian-Canadian heritage.

Public murals are part of the successful and ongoing process of reversing decades of stagnation on Preston Street. Realized by artist Karole Marois, the mural’s colourful and multifaceted images depict the heritage and social history of the Italian community in Ottawa. Its colours have brightened a once-dark and gloomy underpass by creating an easily recognizable and visually appealing community gestalt that highlights the history of the people who lived and worked in the area.

The mural on the west side of the street is divided into an upper and lower canvas. The lower space takes the viewer along a timeline of an earlier Preston streetscape. It begins at Preston Street’s southernmost extension, Carling Avenue and the Little Italy Millennial Arch. From here it centres upon a CN train (the train tracks once ran along the current location of Highway 417), moves northward towards an arriving streetcar (reminiscent of days when streetcars rambled along Preston Street), the Plant Bath at the corner of Somerset Street (built in 1924 to improve the hygiene and well-being of the community’s citizens and now a heritage building), and ends at the Booth lumber yards. The streetscape is corniced by Dow’s Lake to the south and the Ottawa River to the north.

The east-side view is again divided into an upper and lower canvas. The lower section symbolizes the immigrant’s voyage to Canada. Indeed, whereas the western side of the street reveals a background scenario of trees and buildings, the eastern side displays the body of an ocean liner with the usual panels painted upon the ship’s hull. The arriving immigrants, laden with their cardboard suitcases, appear as dark silhouettes against the ship. They arrive at a mythical Pier 21 in Halifax, eventually making their way to “Little Italy,” inscribed on the mural in bold letters. The upper half continues with the thematic approach and includes St Anthony’s Church, the Servite Sisters of the Addolorato, the Feast of San Rocco, the Angelo Fiore Memorial, Trattoria Caffè Italia, La Roma Restaurant, Preston Hardware, Il Lavoratore, Family Photos of the Crotoneo Family, Venice Steel Works, the Prescott Hotel, La Bottega, Pasticceria Gelateria Italiana, Domenico Licari and Family, Fleischer Photography, St Anthony’s Ladies Aid, the Guzzo-Adamo Grocery, the Ottawa Rapinese Soccer Team, and the Associazione Rapinese di Ottawa. (For a more detailed description of each individual mural, click here.)

The mural has rallied the community and re-established a lost sense of place and Italian-Canadian pride and accomplishment. As a composite of community pride, this public celebration of past immigrant arrivals, present individual successes, and future family aspirations has generated a new civic dialogue that encourages a more active participation in the visual renewal of the streetscape, not only by local inhabitants but by the community at large. By affirming community presence without denying individual space, the mural visually shares the unique history of the Italian-Canadian community and its solidarity with outsiders who visit the area.

The mural is thus one more component that visually distinguishes Ottawa’s Little Italy from other neighbourhoods in the ever-expanding city. Sponsored by the Preston Street Business Improvement Association (BIA), it also represents the first time that the provincial Ministry of Transportation has permitted a private project on a public structure.

Because Preston Street is first and foremost a place for people – something the mural promotes and emphasises, this outdoor art gallery is only one of the projects that animate the new heart of the old community, giving it a new and sustainable self-identity. The fact that it is located beneath a six-lane highway overpass makes it striking and visible. But it is not the sole representation of the new visual culture sprouting on Preston Street.

Postcards from the Piazzas
A suite of 15 granite, bronze, and stainless steel sculptures now line the rejuvenated Preston Street. Commissioned by the City of Ottawa, the project continues the outdoor gallery approach adopted by the Preston Street BIA. Immediately visible to pedestrians and drivers alike, the human-sized sculptures line both sides of the street in a processional colonnade of eclectic themes and subjects. 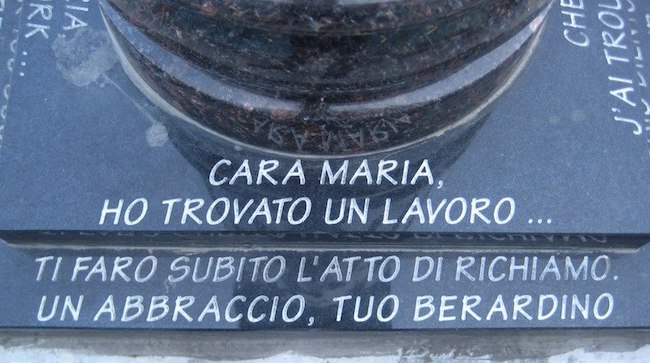 Detail of granite sculpture as part of “Postcards from the Piazzas” display by cj fleury on Preston St, Ottawa.

The statues are the brainchild of cj fleury, a multi-media artist and cultural researcher who is deeply interested in the role of art in contemporary society. Viewing the Preston streetscape as a living, organic entity, fleury set out to animate the street with signposts of Italian-Canadian culture that wish to connect “the old country” to Little Italy.

The sculptures are human-sized, inviting people to stop and dialogue, touch and interact with the many motifs, patterns, literary excerpts and the statuary atop the pedestals. Memories of the cultural history of Preston Street come alive as one discovers the multifaceted realities of the Italian-Canadian community. (To see all 15 sculptures, click here.)

There’s a simple large brimmed hat atop one column, a reminder of the many lone men who braved the immigrant voyage to forge a new destiny for both themselves, their families and families to be. The tools of their trades are emblazoned on the column plinth, while a period letter informs Maria that “I found work… I will send for you soon. Love, Your Berardino.” Another pedestal pays silent homage to the origins of soccer in 1565 in Santa Croce Square in Florence. Still another celebrates the intrepid voyages of Marco Polo to Asia, one of the peninsula’s original emigrants. An emerald-coloured map depicts his voyages, while the shape of the column recalls the architecture in Piazza San Marco.

As with the murals, a wonderfully inspired idea is somewhat lost in the arbitrary nature of the individual themes spread over the sidewalks of Preston Street. Nothing really connects the pedestals, beyond the uniqueness of the artist’s perspective and the intentioned cultural walk of the willing participant. Perhaps a more localized subject-matter connecting the art pieces to Preston Street and the local community, rather than an idealistic attempt to bring the best of Italy (of which most immigrants, sadly, would have no clue) to the grey landscape of Little Italy would have given the postcards a more vital and grounded narrative.

Gateway Plaza
In May 2008 the rehabilitation of the Preston streetscape (beyond sewer and water main replacement) was enhanced by the creation of a public plaza at the intersection of Gladstone Avenue. The plaza continued and consolidated an effort by the BIA to identify the area’s unique features and animate the street with viable cultural icons. 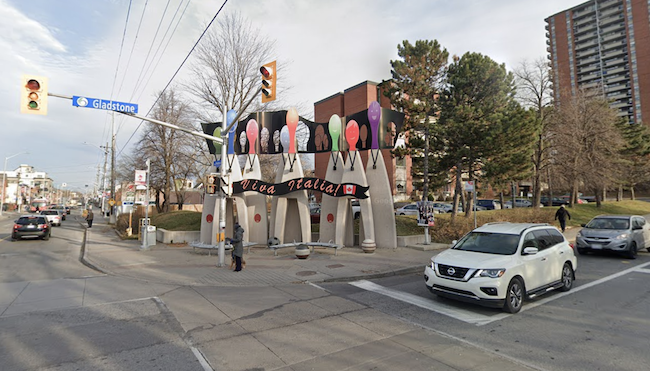 Again, public art was at the centre of a project for the visual renewal. But was it successful? Towering, stylized statues of 11 soccer players (the on-field number of one team), immediately baptized i bambini, were erected at the intersection of Gladstone, with four players located on the southeast corner and seven more players located on the northeast corner. Designed by Stantec Engineering, the 11 statues are made of coloured precast concrete, granite heads and tempered coloured glass. The players are apparently dribbling soccer balls, and we can only imagine that they are inviting passers-by to do the same.

According to Stantec, their engineers worked closely with the city and local community representatives to address the practical requirements of the street by balancing the needs of traffic with transit, cyclists, pedestrians, businesses, and residents. The rejuvenation also provided places for the street to come alive through inviting streetscapes that include gardens, tree plantings, flowerbeds, wide sidewalks, piazzas, and patios. It also included elements of art and welcoming gateway features aimed at highlighting the area’s culture.

Despite the claims, towering statues of soccer players don’t seem to fit the urban mix, and are more indicative of a stereotype of soccer fans and soccermania amidst what is supposedly a street that should recall, highlight, promote, and possibly extemporize memories of the community.

Portal Archway
In June 2002, four polished autumn-brown Caledonia granite columns, two on each side of the street, were erected at the intersection of Carling Avenue and Preston Street. The imposing columns rise 4.8 metres, and are connected by a 22-metre-long curved tubular arch that crosses over the Preston roadway and forms the Portal Archway. A neon sign centred on the archway welcomes people to Little Italy. The architectural landmark was a gift to the community by the Preston Street BIA. The project was spearheaded by Leo Bortolotti.

The granite columns were produced in Quebec and assembled in Montreal by Les Granits Montval. The Durie Commercial Contracting company was responsible for the installation. The tubular steel arch was rolled, fitted, welded and polished by Carleton Iron Works of Ottawa. The goal of the Portal Archway and the Gateway Plaza was to create a delimited destination area, similar to an Italian piazza. Signs point to Preston Street, and the visitor may stroll the area while examining landmarks that preserve its cultural heritage.

Franco Ricci is Professor of Italian Studies at the University of Ottawa. Author of numerous books, collections of essays, and scholarly articles, his The Sopranos: Born Under a Bad Sign received considerable acclaim. This article is an excerpt from his forthcoming Preston Street/Corso Italia: An Informal History of Italians in Ottawa (Bordighera Press). 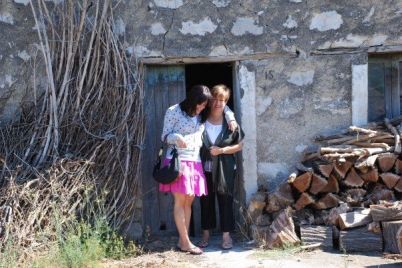 I Left My Heart in Campania

Just How Many Canadians of Italian Origin Are There? …And Where Do They Live? 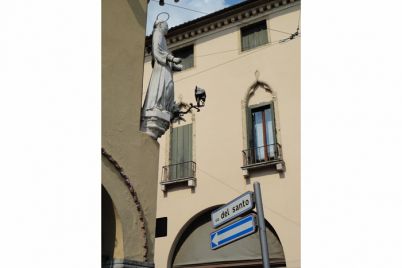 My Italian-Canadian-American Life in Reverse