My fascination with cultural identity stems from the fact that I grew up immersed in three separate cultures that were often at odds with each other. I was legally Canadian, culturally Italian, and linguistically, a Quebecker. This hyper-awareness surrounding my cultural identity was only compounded when I left Montreal and moved to Newfoundland for graduate school in 2007. Leaving multi-ethnic Montreal and moving to the more culturally homogenous city of St. John’s heightened my understanding of my Italian identity. Suddenly, I was the token ethnic in my group of friends. The foods I cooked, the languages I spoke, and my olive complexion were exotic markers of my place as an outsider. I had never felt more Italian.

Partially fuelled by my own search for a cohesive identity, I wrote my Master’s thesis on the cultural identity of second and third generation Italian Canadians in Montreal. I had hypothesized that the young Montreal Italians I was researching would demonstrate a superficial relationship to Italy, their Italianness, and any traditional customs their families had brought over. However, those who participated in my fieldwork consistently demonstrated a steadfast passion for their Italian background. What was even more fascinating was their cultural hybridity; they learned to navigate an ambidextrous culture that was not quite Italian or Canadian (or at least what they perceived to be “Canadian”), but a wonderfully dynamic, complex, and fluid sense of ethnic identity.

In focusing on the ideas of home, belonging, and identity for this issue of Accenti, I returned to some of the young men and women who took part in my Master’s research – Alexander Scalia, Michelle De Vincenzo, Jacqueline De Stefano, Tania Zampini and Elizabeth Cotignola – and asked them to write about their experiences in Italy as Canadians of Italian heritage. There is no better way for me to thank them for being such wonderful research subjects than to let them tell their stories in their own words and on their own terms. I also asked fellow folklorists and ethnologists Cristina Pietropaolo and Giulia De Gasperi to share their thoughts and experiences about their cultural identity. Cristina, a Torontonian now living in Ottawa, writes about her solo trip to Italy, while Giulia discusses her ever-changing identity as an Italian expatriate.

As a country largely populated by immigrants, ideas of what it means to be Canadian are still being forged for many of us. My hope for this issue of Accenti is to foster a dialogue between the various relationships many of us have with Italy and with our cultural heritage. 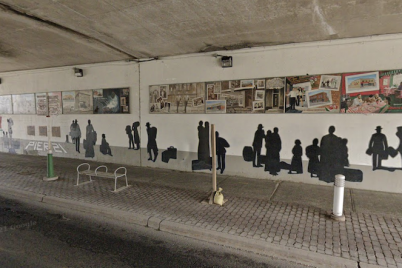 Ottawa’s Little Italy Revives Street Art As It Revives Itself