ACCENTI: Thank you for agreeing to appear in the inaugural issue of Accenti Magazine.

ACCENTI: You delivered a very emotional address during the ceremony designating Madonna della Difesa Church a national historic site. Do you feel a special attachment to the Italian Canadian community?

Sheila Copps: I was taught to speak French by Italian teachers. One of them is the teacher who inspired me to learn the Italian language, as well. She became the first woman superintendent in the Hamilton school system. Her father was one of the people interned during the Second World War because of the climate at the time. I’ve had over the years lots of occasions to talk about it, how much it hurt her as a little girl to see her father taken away, and how that piece of her life has never been totally healed… There was a particular building on Barton Street, which had basically been the first Italian community centre in Hamilton. It had been purchased by a few people who wanted to have a place to gather for their community. The building was taken over by the government of the time and given to the Poles at the end of the war. It subsequently became the Polish legion. The building was never returned, there was never an acknowledgement of that part of our history. I know there was a certain opposition to the designation of Madonna della Difesa Church because of the fresco…

ACCENTI: There is no denying that the Italian community at the time across the country suffered greatly from the deplorable events of 1940-1945. Some maintain that the repercussions are still felt today. Do you think that the incarceration of some of the community’s most prominent members of that time in a sense thwarted the development of the community and its integration into Canadian society?

ACCENTI: More specifically, I guess I’m alluding to the fact that Difesa Church has been in existence for some eighty years. Yet only now, and after a five-year effort spearheaded by Mr. Loris Palma, has it finally been designated a national historic site. Do you think Italians have refused to draw attention to themselves because of a certain collective apprehension which stems from the events of the internment.

Sheila Copps: No, I think there are moments in history that every people would love to change. I think the reason the designation took as long as it did, was not because of the Italian people; I think it was because some of the people who are responsible for Canadian historic designations don’t realize that historic designations should reflect the whole history of Canada and not simply the history of the French and English. If you look back to the designation changes that we made in 1999… In 1999 I required the regulations for designations to be changed because I felt that the history of the English and the French was well documented and celebrated, but the history of almost every other People was almost absent. So we’re actually engaged in a process to redress that imbalance, and this designation was one of the pieces of that puzzle. I’m actually hosting a conference in the spring which is going to be about how to make Canadian Heritage more representative of the whole of Canada, not just of the English and the French, in Ottawa. But I can tell you that other designations that we’ve done including the designation of Africville in Nova Scotia and the designation of the Temple in Abottsford, each of those had resistance. Because, you know, if you look at the situation in Africville, there was a whole community that was displaced by the municipal council and that only happened forty years ago. So there is a lot of scar tissue there that needs to be healed. But sometimes people don’t even want to recognize it. So the recognition, I think, is part of the healing.

ACCENTI: There appears to be a battle, in a sense, between the officially recognized language groups and the so-called ethnic minorities.

Sheila Copps: I think that if you saw the response to the designation of Madonna della Difesa Church, obviously there was a huge amount of over-all public support for it. Even though some people were afraid that in designating it we would be seen to somehow aggrandize [former Italian dictator Benito] Mussolini. It fact, it was not the case. That’s the message that came out.

ACCENTI: At the risk of sounding facile, what do you think have been some of the great contributions that Italian Canadians have made to this country over the course of the last one hundred years of immigration?

Sheila Copps: If you look at the union movement in Canada… I would have to say that the development of the union movement is one area where Italians have had a big role to play. You have to work collectively and not just individually. Obviously, in political and financial circles there are many, many Italian Canadians who have risen to prominence and have occupied important posts.

ACCENTI: What do you think are some of the things that in some ways distinguish Italian Canadians and, on the other hand, make them resemble other Canadians?

Sheila Copps: I think that one of the distinguishing characteristics of Italian Canadians is that they are incredibly hard working. And that would be from the construction workers through to the president of Saputo (chuckle). Incredibly hard-working people. This isn’t to say that others are not hard working. Also, if you look at the history of Italy, it’s not sort of one homogeneous history, it’s the history of different peoples in different regions who have come together to make a country. And in a sense that’s very similar to Canada. If you look at, for instance, Sicily and Calabria, they are two distinct, dare we say distinct societies? Yet they’ve come together to make one country. I think that’s what we are trying to do in Canada. Same sort of idea that in different regions you have different characteristics, but you can still make one country. … And the other thing that’s very interesting… I had so many Italian friends growing up and most of my best friends are Italian.., they also love politics. And that’s something that’s very different. Most Canadians, the majority are turned off by politics, right? Italians love to talk politics. I sat over many espressos in so many kitchens or kitchens in the basement talking politics. The love of politics also means that they get involved and make things happen.

ACCENTI: As you mentioned and as many Canadians know, you are fluent in Italian. How did you learn the language of Dante?

Sheila Copps: When I was in high school, we had an option of studying Italian. I went to a Catholic public school, where we were offered Italian in grade eleven, twelve and thirteen. I studied it all three years under three different Italian teachers. They taught me French and Italian. And in university I also studied Italian. I took a minor in Italian as part of my degree in French and English. I studied literature and art – Donatello, Dante, Machiavelli…

ACCENTI: I imagine Machiavelli came in handy once you decided to go into politics.

Sheila Copps: (chuckle) Let’s put it this way. I have probably, in the latter years of my political life, come to appreciate more deeply some of the lessons that I could have learned, that I didn’t really understand in university.

ACCENTI: As Canadian Heritage Minister you are necessarily sensitive to issues pertaining to arts, culture, and ethnic communities. In your estimate, how sensitive are your Cabinet colleagues to these same issues – to the issues that are foremost in the minds of so-called “ethnic” Canadians?

Sheila Copps: I think they are. Pierre Pettigrew for one attended the designation ceremony. I think that one of the things that happens when you are in government is that a lot of your time gets spent managing your department. And so, sometimes you don’t have time to reflect on the things that brought you there. So I’d say that there is generally a great sensitivity. I know for example, and I mentioned it when we did the designation, there wasn’t a week that went by that [former minister of Public Works] Alfonso Gagliano didn’t mention the designation to me… He worked very hard on that designation. It was never put on the front pages of the newspapers, but he was there.

Sheila Copps: I think that as a party we’re always trying to push the envelope and make the country more inclusive. We’re not satisfied with the status quo. The status quo is never good enough. And I think that’s why the Liberal Party has been the natural home of Italians. Because Italians also want change. They want in, they want to be partners. And in order to be partners, that means you’ve got to be prepared to make some changes. I hope and believe that the Liberal Party is the place where those changes can be made.

Sheila Copps: Thank you, it’s been a pleasure. 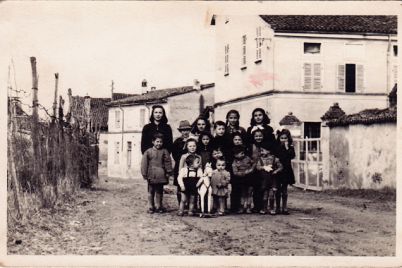 The World I Want to Dream of