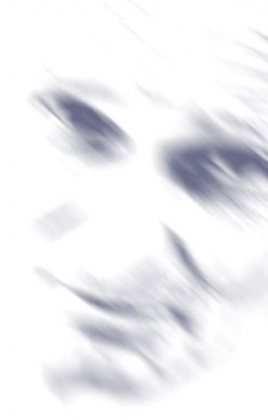 The man opens his eyes and sees the boy. He has come to sit beside him on the bench.

“You were sleeping,” says the boy. He’s about four or five.

It’s a warm evening and the boy is wearing shorts. He’s pudgy and his legs are soft and rosy. The man puts out his hand to touch the tender flesh, but then pulls back.

“My grandfather has a cane, too. But it’s not fancy like yours. You must be rich!”

The boy jams his hands between his knees and aims at his toes.

“Do you live around here?” enquires the man.

“Over there,” he tells him, pointing a chubby finger straight ahead. There’s a small wooded lot between the park and the street. “The blue house.”

“Oh. Yes. I see it now – between those branches over there. It’s the colour of robins’ eggs.”

The boy shrugs. “I never saw any robins’ eggs. I don’t know what they look like.”

“I see… And your mother – does she know where you are? Did you tell her where you were going?”

He kicks his legs, first one and then the other. “My sister babysits me at night. But she’s always talking on the phone. That’s all she ever does. I never tell her anything.”

The boy slides back and forth on the seat. Then suddenly stops, to peer down into the grass. The ground is still soft from the afternoon rain and a worm is starting to work itself out of the earth.

“But I know how to run,” he says, as if he has suddenly remembered to answer. He slides off the seat.

The man notices the boy’s shoe laces; they have come undone. “You could fall down,” he tells him. “That could happen.”

But the boy is not listening anymore; he’s busy trying to pull the worm out as far as it’ll come. “I go fishing sometimes,” he murmurs absently. “I have to get my own bait.”

“Fishing… that’s nice,” says the man, beginning to sweat. “I used to do that too, when I was young. I used to catch pickerel and trout. Big ones, too.” His chest feels tight.

“Jimmy,” a young girl calls. They can’t see her, but she’s not too far away from where they are.

“That’s her,” says the boy, putting his head up for the second time. He doesn’t really want to leave the worm alone now that he’s almost got it all the way out.

“You little brat. Where are you? Wait till I get you!”

The man feels a pain starting to spread underneath his right shoulder and he quickly reaches into his pocket for the little plastic container. “You’d better go,” he murmurs, putting a tiny pill underneath his tongue. “Better—”

Reluctantly dropping the worm, Jimmy gives a deep sigh. “She thinks she can boss me around, but watch and see. When I grow up, I am going to beat her up.”

Arms swinging at his sides, he starts to leave.

The man gets up from the bench quickly. “Eh kid… don’t come back,” he shouts, gripping his cane so tight his knuckles hurt. “Stay away from this place from now on. Do you hear?”

“Why,” says the boy, nonchalantly.

“Never mind – just don’t. You don’t understand. Anything could happen – anything.”

Laughing, the boy turns a somersault. But when he’s about to do another one, suddenly he changes his mind. He starts to run home, instead.

Left alone, the man stares for a long time at the blue peak of a house he can barely see through the gently swaying leaves.

Delia De Santis is a regular contributor to Accenti. She is co-editor of Sweet Lemons: Writings with a Sicilian Accent (Legas, 2004). She lives in Bright’s Grove, Ontario.

This story was first published in Accenti Magazine Issue 11.