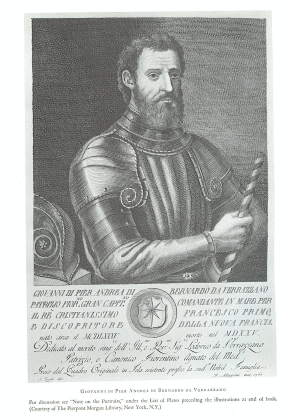 Giovanni da Verrazzano’s name belongs on the same marquee as the great navigators Cristoforo Colombo, Giovanni Caboto and Amerigo Vespucci. Da Verrazzano – explorer, navigator, ethnographer, and merchant adventurer – was the first European to explore the Atlantic coast of North America between South Carolina and Nova Scotia. He travelled with his brother, cartographer Gerolamo, and together they were the first to add the east coast of Canada to world maps.

Sailing under the patronage of François I of France (known among English speakers as Francis I, 1515-1547), the brothers named the lands they discovered in honour of the king or his country, including the area that would be known, until 1763, as Nova Gallia or New France. The da Verrazzano brothers reached New York Harbour in 1524, almost 100 years before Henry Hudson (1609). While Americans eventually honoured Giovanni by naming after him the vast double-decked suspension bridge that connects the boroughs of Staten Island and Brooklyn in New York City, Canadians have all but buried him in the dustbin of history.

Very few biographical details are known about the explorer, among them the fact that he was Florentine. Historians have been unsuccessful in definitively tracing his lineage. Two different families have been proposed. From the late 17th century until the early years of the 20th century, researchers claimed da Verrazzano was born in 1485 in Florence or in nearby Val de Grave, to Pietro Andrea di Bernardo da Verrazzano and Fiametta Capella.

More recently, in 1961, the French historian and biographer, Jacques Habert, focused on the family of Giovanna Guadagni and Alessandro di Bartolomeo da Verrazzano. Giovanna and Alessandro married in 1480 and lived in Lyon, in an enclave of wealthy Florentine bankers, merchants, and silk manufacturers. Because Giovanni’s record of birth has yet to be found, the names of his parents and date of birth are speculative. Habert’s investigation has the advantage of explaining the navigator’s presence in France and his influence with the king of France.

Researchers, both past and present, agree that da Verrazzano was an educated and cultured man, a sophisticated writer, and an experienced navigator who had travelled widely even before his North American adventure. His circle of acquaintances included the Portuguese explorer Ferdinand Magellan (1480-1521). The two men sailed together prior to Magellan’s epic expedition around the globe from 1519 to 1522. (Magellan died on route.)

Da Verrazzano’s primary goal, like most 15th and 16th century navigators, was to find a passage by sea to Asia and China. Europe had developed a taste for the silks of China and the spices of the east. The overland route popularized by Venetian explorer Marco Polo (1254-1324) was a lengthy and expensive venture. Moslem tribes controlled the Asiatic trade and they levied heavy freighting charges, tolls, and custom fees. A shorter route that would allow merchants to avoid paying tariffs would significantly help lower costs of valued commodities.

Da Verrazzano believed he could succeed in finding a shortcut to the East where Colombo, Caboto and Vespucci had failed. He deliberately chose the mid-Atlantic, a geographic region not yet charted by his predecessors. In 1497, Caboto, under Henry VII of England, had staked a claim to lands in the north Atlantic (Labrador and Newfoundland) and explorers for the Spanish, Colombo (1451-1506) and Vespucci (1454-1512) included, had charted the coast of Florida and territories further south.

The navigator and King François carefully prepared for a lengthy journey. Da Verrazzano left Dieppe in December of 1523, with a fleet of four convoys. But all did not go well, as he later wrote to the king in his eloquent summary of the journey, an 11-page folio discovered in 1909, and referred to by historians as the Cèllere Codex: “Since the storm that we encountered in the northern regions, Most Serene King, I have not written to tell Your Majesty of what happened to the four ships… as I thought you had already been informed of everything – how we were forced by the fury of the winds to return in distress to Brittany…and then according to our new plan, we continued the original voyage with only the Dauphine” (see L.C. Wroth).

Although he wrote his narrative after having completed his journey, the vivid descriptions and specific details he includes indicate he may have kept a journal while at sea: “We set sail with the Dauphine from the deserted rock near the Island of Madeira… on the XVII day of January last; we had fifty men, and were provided with food for eight months, with arms and other articles of war, and naval munitions; we sailed westward on the gentle breath of a light easterly wind. In XXV days we covered eight hundred leagues. On the XXIIII day of February we went through a storm as violent as ever sailing man encountered… We continued on our westerly course, keeping rather to the north. In another XXV days we sailed more than four hundred leagues, where there appeared a new land which had never been seen before by any man, either ancient or modern.”

Da Verrazzano’s narrative goes on to depict the geographical and topographical features of what is now Virginia, Maryland, Delaware, New Jersey, New York and Rhode Island, and his encounters with aboriginal people along those coastlines. He describes not only the beauty of the land, but its potential for harbouring ships and cultivating crops. His anecdotes about natives and their culture is one of the earliest ethnological studies of aboriginals north of the Gulf Coast of Florida. The tone of his writing indicates he had a respectful and non-judgemental attitude towards aboriginals. One tribe is “dark in colour, not unlike the Ethiopians, with thick black hair, not very long, tied back behind the head like a small tail. As for the physique of these men, they are well proportioned, of medium height, a little taller than we are.”

Another tribe is “a bronze colour, some tending towards whiteness, others to a tawny colour; the face is clearcut; the hair is long and black, and they take great pains to decorate it; the eyes are black and alert, and their manner is sweet and gentle.”

Da Verrazzano reports a number of positive incidents with natives, including a group of men who saved one of his sailors who was attempting to swim to shore, “so tossed about by the waves that he was carried up onto the beach half dead… Whereupon the youth realizing he was being carried away like this, was seized with terror, and began to utter loud cries. They answered him in their language to show him he should not be afraid.” The rescuers built a fire to warm the crewman and when he indicated he was ready to leave, “they accompanied him to the sea, holding him close and embracing him; and then to reassure him, they withdrew to a high hill and stood watching him until he was in the boat.”

On the more northerly section of their voyage, the navigator and his crew encountered aboriginals who were suspicious of Europeans. An incident is described which, in hindsight, is indicative of the racial conflicts in the centuries ahead: “If we wanted to trade with them for some of their things, they would come to the sea shore on some rocks where the breakers were most violent, while we remained in the little boat, and they sent us what they wanted to give on a rope, continually shouting at us not to approach the land… Against their wishes, we penetrated two or three leagues inland with XXV armed men…they shot at us with their bows.”

Da Verrazzano returned to France after four months at sea disappointed by his discovery that the American continent was unexpectedly enormous, much larger than Europe, Africa or Asia. He sailed twice more to the Americas, once on a trading mission to Brazil (1527-1528) and then in 1528, to the Lesser Antilles, where he was presumably murdered by cannibals.

Just six years after da Verrazzano’s death, in 1534, Jacques Cartier also set sail for François I on a mission to retrace the steps of his Florentine predecessor. On July 24 of that year, along the shores of the St. Lawrence River, in New Gallia, Cartier planted a 10-metre-high cross bearing the words “Long Live the King of France,” thereby staking France’s claim in the founding of Canada.

Born in Sicily, Venera Fazio now lives in Bright’s Grove, Ontario. She is coeditor of the anthology Sweet Lemons: Writings with a Sicilian Accent. Her prose and poetry have appeared in magazines in Italy, Canada, and the United States. She is currently working on a sequel to Sweet Lemons. 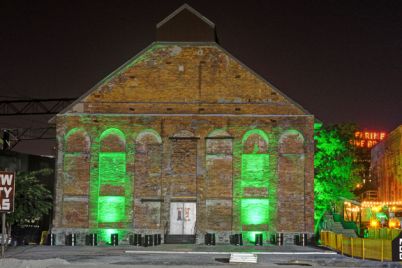 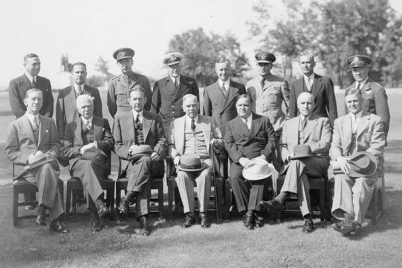