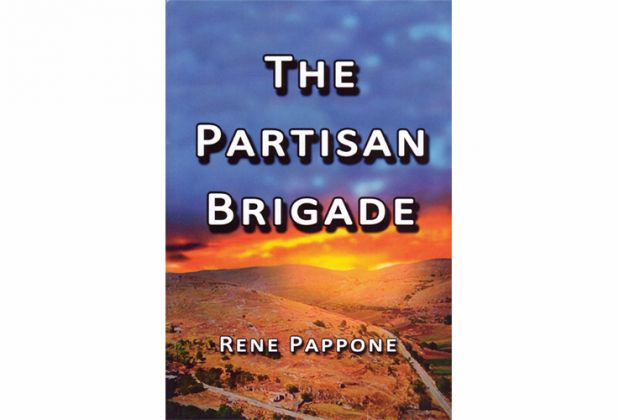 In Rene Pappone’s latest novel, The Partisan Brigade, a long-kept secret haunts a man. He still harbours the painful memory of the injustice that embittered his family. If he returns to the place where, in tragic circumstances, he acted against his own beliefs, would he finally find solace? Pasqualino Leone has been asking himself that question ever since he returned to Canada from a secret mission during the Second World War.

The story begins at the start of the war. Pasqualino is an Italian-Canadian youth from small-town Northern Ontario. His family had immigrated to Canada from the mountains of Abruzzo and had risen to a comfortable living through hard work and ingenuity. They feel a deep allegiance to the country that allowed them to prosper and provide a bright future for their two children.

But “bad things happened in 1940,” to quote one of the characters in the novel. The quiet life of the Leone family changed suddenly when Pasqualino’s father, Antonio, was arrested and jailed for eight months as an enemy alien on the unfounded suspicion that he was a spy and a Fascist sympathizer. He never recovered from the trauma, dying a broken man unable to forget the shame he had felt.

Young Pasqualino felt responsible for restoring the family’s reputation. He enlisted in the Canadian Army, hoping to be sent to Europe’s battlefields. His language skills and his knowledge of Italian customs make him an ideal candidate for a dangerous secret mission in Italy. After intensive training, Pasqualino, along with two other recruits, is parachuted into San Bertoni, the village in the Abruzzo region where his family comes from. There, he and his two comrades are to recruit and train anti-Fascist locals to conduct guerrilla warfare against the retreating Nazis. He succeeds in accomplishing his mission. The San Bertoni Partisan Brigade inflicts heavy losses on the German forces, but also suffers several casualties. Pasqualino must face an unimaginable level of horror and violence, and carry out actions that conflict with the principles he was raised by.

The Partisan Brigade, whose narrative spans over four decades and two continents, delivers action and suspense at a breathtaking pace. Pappone’s writing is concise yet expressive, and he has done his historical research thoroughly. The obvious attention to the details of the rigorous training of the special agents, the descriptions of the preparation, and execution of sabotage and guerrilla operations bring authenticity to the story. However, the focus of the novel is the moral dilemmas that Pasqualino faces. He, like many others, is driven by noble ideals and by the urge to honour both his family and his country. But the grim reality is that to fight against tyranny he must hide his identity, lie to his family, be prepared to kill fellow-Italians and when necessary, forget his own humanity. Special agents are taught “silent killing” and other ruthless survival techniques, because the basic rule is “kill or be killed.” Yet, when Pasqualino slits a German soldier’s throat, he can’t justify his action so easily.

Pasqualino felt his own body go numb as he stood aghast over the enemy soldier, fighting off the urge to run into the woods to retch his guts. I can’t believe I did this, he cursed to himself, and the more he tried to rationalize his action, the more he kept asking himself: What right did I have to creep up on this unsuspecting human being and take his life?

How can you face absolute evil without letting its corruptive influence contaminate your own soul? Is the carnage and horror of war justifiable even when war is waged in the name of a sacred cause? The main issues go beyond Pasqualino’s personal story, and are so essential and universal that probably there isn’t a true answer to any of them. Pappone’s protagonist manages to retain his principles because he can acknowledge these quandaries, but he pays a great price for the rest of his life. It is only with his return to San Bertoni, many years later, on the occasion of a ceremony honouring a fallen priest who had worked for the Resistance, that he can come to terms with the anguish and the sense of failure that he felt for sixty years.

Another realization haunted him. When he left home to join the army, it was with the intention of restoring his father’s dignity and showing, in a concrete way, that the Leone family was loyal to Canada. But he ended up, instead, in a dangerous mission shrouded in secrecy. Nobody back home would know what he had been through or done to help bring peace and liberty to Italy. He would be judged by his cover story, a soldier with a cushy job, travelling across Canada at military expense while other boys were doing the heavy lifting.

Pappone’s book is both a gripping action tale and an exploration of sensitive and still very relevant and contemporary issues. The Partisan Brigade highlights the deep wound that the unjustified Second-World-War internment of Italian Canadians inflicted on individuals and families, and the indignity that was felt by the entire Italian-Canadian community. The internment represented a betrayal of their dreams and their efforts to belong and contribute to their new country. The pain and shame were felt trans-generationally. Only a few years ago, did the Canadian Government take action to acknowledge the wrongfulness of the Internment.

Rene Pappone began his career as a journalist in 1955, working in radio, television, newspapers, and national agency newsrooms. He also worked as a Parliamentary correspondent for six years, and covered such major news events as the FLQ crisis in 1970, foreign visits by Prime Minister Pierre Elliott Trudeau, and two federal general elections. In 1975, Pappone joined the federal government as a media relations officer, before becoming director of information. While at Canada Immigration, he was spokesperson for the department when Iron Curtain athletes defected during the 1976 Montreal Olympics. He also directed the Public Affairs group. He is the author of three other novels: Beyond Expectations: Memoirs and Stories of a Timmins Boy (2007), The Rogue Files (2011) and The Hai Hong: Profit, Tears and Joy (2014).

Anna Foschi Ciampolini was born in Florence, Italy and lives in Vancouver, B.C. She is an award-winning short-story writer, freelance journalist and translator, co-editer of three anthologies, Emigrante, Writers in Transition and Strange Peregrinations: Italian-Canadian Literary Landscapes. She is a founding member of the Association of Italian Canadian Writers, and a co-founder of the F.G. Bressani Literary Prize sponsored by Vancouver’s Italian Cultural Centre. She is an inductee in the Italian Cultural Centre’s Hall of Fame for her cultural and humanitarian activities. She publishes in Canada, Italy, U.S.A. and Costa Rica.