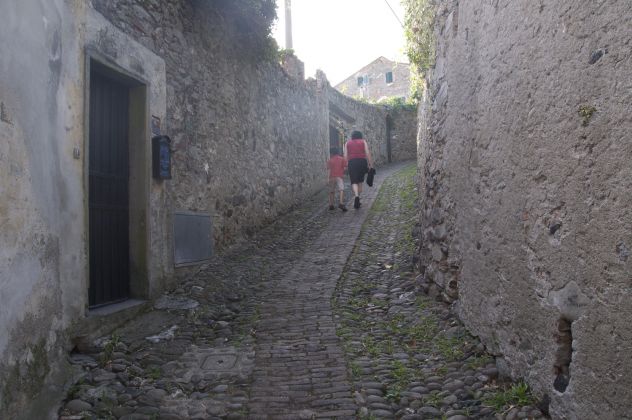 I resisted the arrival of winter – waiting to change the tires, taking the car less frequently, walking as much as possible in an attempt to slow down and de-stress from this fast-paced urban lifestyle.

Mornings I walk my eight-year old son to school. It’s a fifteen minute brisk walk and he actually keeps up. Decio likes to walk. It gives us a chance to chat in Italian, and brings a bounce to the day. Some mornings we run into our neighbour Giovanni, also out on his morning walk. Strangers who see the three of us walking think we are three generations of the same family. Recently, Giovanni loaded me with rosemary, sage, and thyme from his garden, and he gave me tips on how to preserve them indoors. He’s passing on his traditions and knowledge in gardening, as I am passing on Italian to my children.

My efforts, for nearly fifteen years, to keep the children speaking Italian paid off this past summer when my husband and I (finally!) travelled to Italy with the kids. It was satisfying to see the children order food, and converse with locals and relatives. They felt at home in the country our parents and grandparents left behind, at ease with the people we met. They even got to play soccer with other kids. I fondly recall my son building a sandcastle with his new friend Matteo, whom he met at the beach. Matteo was surprised when he discovered hours later that he was playing with a Canadian kid who speaks Italian.

If Italians can make the effort to learn English (a lot of English is spoken in Italy, we discovered!), then descents of transplanted Italians can certainly reacquaint themselves with the language of their forebears. This is one of the goals of the Centro Scuola in Toronto, as we read in an article by Caroline Morgan Di Giovanni. This issue also takes us to Canada’s geographical extremes with an article about Halifax’s new cultural centre by Caterina Fava and a piece by Anna Foschi about a rather peculiar Christmas in Vancouver some years ago.

Creativity among Italian Canadians is alive and well, as reported in articles on playwright Steve Galluccio and visual artist Frank Caracciolo, in fiction by Darlene Madott and Michael Mirolla, and in poems by Marisa De Franceschi, Frank Giorno and Carmine Starnino (short-listed for a Governor General’s Award in 2009).

I invite you to express your own creativity by entering one of our contests. In the fall, Accenti proudly announced its 5th annual writing contest and 3rd photo competition. The contests were established to encourage creative expression about Italian Canadians, Canada and Italy. The winners were published in the last issue. The second place winners – Terri Favro for writing and Monica Lisi Lacey for photography – are published in this issue. Domenic Cusmano’s light-hearted piece on truffles (are they really that expensive?) rounds out the issue.

Accenti celebrates Italian influences on Canada’s cultural heritage and acts as a bridge between Canada and Italy. From the Torino Olympics in 2006 to Vancouver in 2010, our cover features the graceful and dazzling Carolina Kostner, Italian and European figure skating champion, who will be vying for a gold medal at the Vancouver Winter Olympics in February. Happy winter and happy reading!