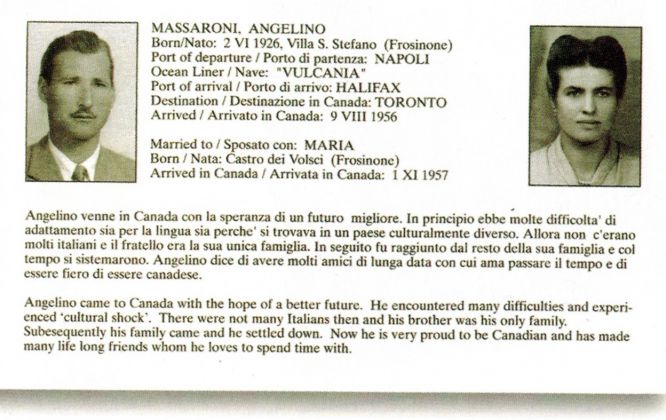 The Valigia d’Oro Award was created with the purpose of recognizing the sacrifices and contributions made by Italians who immigrated to Canada. Every year since 1999, the year the Award was created, recipients are honoured in the presence of family members, friends, representatives from the Italian Consulate, and all levels of government. Over the course of the last five years, 749 recipients have been honoured. At this year’s Valigia d’Oro Legacy Banquet, held on June 8, the Honourable Maurizio Bevilacqua addressed the recipients candidly as “pioneers” and applauded them for the tremendous role they have played in the development of Canada. He told them to be proud of their victories and accomplishments in this country, and congratulated them for the example they have set for future generations.

The elegantly decorated Hollywood Princess Banquet Hall in Vaughan, Ontario, was filled to capacity, with over 600 people – families, friends and guests of the 124 honourees. The celebration began with an official march-in ceremony led by an RCMP officer carrying the Canadian Flag and an officer of the Polizia Di Stato carrying the Italian Flag. Behind them were the Carabinieri, Alpini, and Canadian and Italian government officials. Everyone was moved by the powerful voice of young Italian Canadian soprano Elena Pappalardo singing “O Canada,” and equally touched by the Italian national anthem sung by four Italian tenors of the Coro San Marco. Each recipient of the Valigia d’Oro Award was honoured with a beautiful framed print portraying an immigrant couple and their journey to the new land. Pictures of the recipient and his or her spouse as well as their port of departure, their arrival date and the name of the ship on which they travelled are displayed below the print. Inscribed in both English and Italian is a brief story recounted in their own words that underlines the difficulties they faced in their adopted country, their accomplishments and their gratitude towards Canada for new opportunities.

Children, grandchildren and great-grandchildren watched with anticipation as their loved ones were being introduced by Mario Ferri, founder of the Valigia d’Oro Award. “Balsamo Giuseppe e Paolina, nativi di Termini Imerese, Palermo. Giuseppe partì dal porto di Palermo con la nave “Atlantis” con destinazione Toronto. Arrivò al porto di Halifax il 9 novembre 1950. Paolina emigrò in Canada il 28 aprile 1963.” And in a flash, they were back in time. Feeling the nostalgia of their birthplace, recapturing the day they left their country and the long journey into the unknown. Memories resurfaced along with tears of joy.

The formalities over, everyone enjoyed a delicious lunch followed by a great finale of beautiful Italian songs sung by tenor Peter Marino and soprano Rosalind Pickett. In his closing remarks, Mario Ferri restated his commitment to the Valigia d’Oro Project. “Thank you for caring enough to make such a substantial and significant difference to the lives of so many of us,” he told the honourees. “Now it’s up to our generation to maintain and promote these values, to keep the traditions and to ensure that future generations continue to enjoy your legacy of opportunity and success.”

For two of my uncles and for my mother who were among the recipients, this award was the greatest honour they could ever receive.