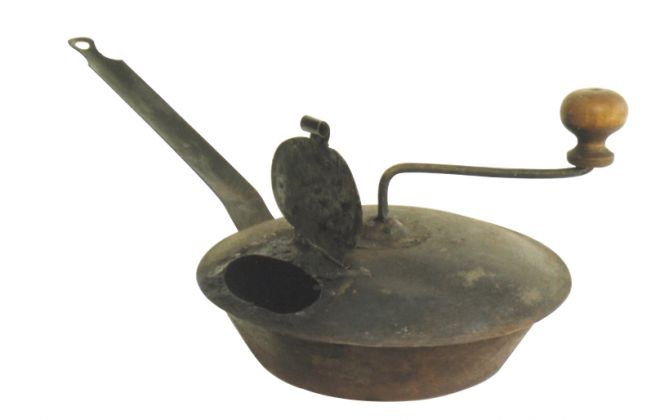 A moment of reflection on the experiences of post-war Italian immigrants to this country is brilliantly captured through a myriad of artifacts in a special exhibit at the Canadian Museum of Civilization in Ottawa. The premiere viewing of the Italian Canadian Exhibit, the creative genius of Ph.D. curators and researchers Angelo Principe, Mauro Peressini and Gabriele Scardellato, is scheduled for Friday, June 13, 2003. Featured in the mosaic of anecdotes-revealed are the unique contributions of Italo-Canadians residing in Greater Vancouver. Their collective contribution is of singular importance. This is to say that their reflections reveal, with common charm and patriotic zeal, the heartwarming story of an adventurous spirit transferred from an old land in recovery to a New World in progress: Fare l’America!

In a fortuitous decision, the committee engaged the services of Laura Quilici. Formerly on the Vancouver Museum Festa Italiana Committee, this Toscano-Pugliese oriunda was contracted to coordinate the local museum project. Laura soon went about her assignment to finesse latent memories and related objects from a host of Vancouverites approved by the committee. In particular she interviewed those who had made the 15,000-kilometre trek from Italy to Canada’s West Coast, circa 1949-1979.

During this period an estimated 35,000 Italians came to British Columbia. In the main, the first wave comprised labourers and artisans in search of opportunities for a better life, while others simply came out of a sense of adventure. Some came to make a quick fortune and return to Italy: Vado in America a cercar fortuna! Later, however, men and women immigrated to Canada’s most westerly province primarily to further their entrepreneurial, professional or academic careers. One side-benefit accruing to Laura for conducting this research was that she connected to her own Italianness in ways not at first imagined.

At age 14, Laura attended Prince of Wales, a prestigious Vancouver high school located in the upper middle-class district of Shaughnessy. While attending PW she began to examine her identity and to question who she was in relation to the rest of her world. It wasn’t that her friends thought her odd or unusual, but there did exist irrefutable lifestyle differences that sometimes set her apart: mortadella sandwiches, East End roots, Italian parents and large expressive olive-brown eyes versus a Waspish flair of designer clothes, favoured social status and, yes, Barbie-like features.

By the time she entered Simon Fraser University in 1987, however, the world had begun its cultural affair with things Italian. Suddenly it was popular to be Italian! Italian Canadian entrepreneurs, academics and artisans had become equal partners in the growth and prosperity of the Province. Having mortadella sandwiches for lunch became the in thing and sipping espresso at an outdoor coffee bar on Commercial Drive definitely a cool experience.

At this point Laura reverted to pronouncing her Christian name in the Italian manner. And, as she increasingly affirmed her own identity, she found solace and communion. Her Master’s degree thesis, entitled “I Was a Strong Lady: Italian Housewives with Boarders in Vancouver, 1947-1961,” spawned a vivid portrait of self-image and cultural-direction. Laura’s research became the genesis of her fascination with her persona.

These manifestations caused Laura to feel a sense of overwhelming pride of association with post-war Italian immigrants. Many of these people, like her father, mother and uncles, had contributed to making British Columbia beautiful: “Do you know what it takes to be an accomplished tile setter? Man that’s crazy work! I mean, working as a skilled labourer, raising two girls, learning a new language, finding reality in the hype and hope about one’s adopted country, takes a brave and committed dad. And mom too! You know, just after I was born my mother opened a high-end dress shop featuring some of Italy’s finest labels. Later it was a travel agency. Can you imagine the sacrifices she made during those years?” Laura was heard to exclaim.

It was with this sense of awareness and understanding of the Italian immigrants’ culture and psyche that Laura approached her assignment. This appreciation along with the knowledge that the project would give voice to Italian culture in Canada became the thesis of her endeavour. She immediately set out to capture a part of Italian culture that had been synthesized Canadian-style as a result of the migration process. It promised to be a bold and historic imprint, one which needed to be recorded and documented.

With each interview Laura’s appreciation of the sacrifices and accomplishments etched along life’s journey by post-World War II immigrants steadily grew. She was enthralled with the degree of tenacity and steadfastness which had been displayed by the majority of Italian immigrants and applauded their Old World values. Laura’s perceptions were confirmed. Immigrants from Italy, through a blend of their customs and ethnic characteristics, had influenced the Canadian society in a multitude of diverse ways. Significant to the documentation are the artifacts associated with commerce, food, religion, leisure activity and community life, all of which manifest themselves as part of the Italian Canadian exhibit.

Laura heard many riveting stories of courage and success from those she contacted. Some of the stories and myths were sprinkled with a modicum of humour that gave a very human and revealing touch to her research.

In one vignette we learn that on a Sunday afternoon in the spring of 1956, a young man is found confidently jumping from a braking train to the platform at the western terminus of CPR after having traversed the breadth of Canada riding the rails. Once on the street and with the majestic North Shore Lions twin peaks in full view, he walks purposefully to a phone booth. He enters and closes the sliding door shut behind him.

Knowing no one in Vancouver and speaking no English, he confidently leafs through the city telephone directory pausing at the listing, “Zaurrini, Francesco.” He rationalizes that this name must be Italian. He dials the number and explains his plight to a sympathetic ear. He is told to stay put as he would be fetched and taken back to the family home, which incidentally becomes his first place of residence in his adopted country. The next day he is hired as a labourer, a job that soon is parlayed into a machinist’s position. His knowledge and skill gain him successive promotions as draftsman and designer and eventual ownership of a successful diamond-drill manufacturing company. Solo in America!

A doll, a simple doll, is the memory of a woman who at age 11 in 1962 came to Canada with her mother and older sister to be reunited with the patriarch of the family. While on board the passenger ship from Italy, the mother worries that the combined weight of the luggage will be too cumbersome to handle on the train to Vancouver. So, she informs her children that most of their toys have to be thrown overboard. Naturally the kids were devastated by the news, as each had squirreled precious possessions in a shoebox for safekeeping. Just before the shoeboxes are sent to a watery grave, however, the younger sister stealthily retrieves a doll and a few tiny cup and saucers from the box and slips them undetected into her garment pockets. The items, in time, become family heirlooms.

In 1998, the organizers of the BC Senior Games add bocce as an event to BC’s annual sports festival. Although the majority of those participating in this event are of Italian origin, the decision to include bocce in the senior games is an indication of the influence, acceptance and growing popularity of bocce in British Columbia. Some of the medals and trophies awarded to Vancouver’s foremost bocce players are now being showcased at the Italian Canadian exhibit.

One of the players in question also came to Vancouver via train from Halifax. He and two or three spirited friends have made the sojourn to Canada together. While traversing the seemingly endless miles of track, the young jocks began to yearn for familiar tasting food. When the train stops briefly for service, the foursome quickly depart the “iron horse” and make haste toward a nearby grocery store. Once in the store they immediately are struck by the cornucopia of foodstuffs available. “Look, look at this box. I don’t believe it. Here in Canada they sell chicken in boxes,” exclaims one of the young men. Taking their prize back to the train, they sit down around a table in the diner car drooling in anticipation of a special chicken snack. Making short shrift of the packaging, they discover, to their surprise, the true contents of the box. “We’ve been ripped off. There’s no chicken in here, only chicken feed.” In retrospect they found much humour in acknowledging that they had mistaken a box of Canada’s foremost breakfast cereal for chicken-in-a box.

The museum officials, sufficiently impressed with the collection of artifacts and story lines, dispatched a curator to Vancouver to interview a number of the respondents identified by Laura.

In reading her report, the curator learned that the diamond drill expert had provided new Canadian technology by creating unique drill bit designs for the extraction of core samples. It is further revealed that the child, whose doll is a lasting reminder of the emigration experience, has grown up to become a leading member of the local Italian Canadian community. Moreover, the proficient bocce player, a foreman on major construction projects, has contributed to the magnificent change in the landscape of Greater Vancouver.

While at the Italian Centre to absorb the value of the research, the curator makes a startling discovery. Encased in a clear plastic receptacle and on permanent display at the Italian Cultural Centre Society Library, courtesy Club Femminile Italiano, is the premiere artifact. It is a simulated piece of luggage so brilliantly sculptured in wood by Tony Mazzega that it often is mistaken for an authentic leather suitcase. In this single object is the embodiment of the motivation behind the Canadian Museum of Civilization’s decision to host an Italian Canadian Exhibit. Mazzega’s valigia is a superior example of Italian ingenuity and creativity. Moreover, this art form, a symbolism of the immigrant’s passage to Canada, has become a profound influence on the Canadian sculpting scene. Incredibile!

Laura Quilici has fashioned an imprint of a social era now ebbing in the tide of time. Her research, a valuable contribution toward creating an awareness of the resourcefulness and ingenuity of Italo-Canadians of Western Canada, is to be applauded. The Italian Canadian exhibit surely will confirm her thesis that the steps forged by post-war Italian immigrants to Canada secured a right of passage for their children and their children’s children, in the pursuit of happiness and fulfillment. This is a legacy to which we can be very proud. O Canada, nostra casa e terra natia. 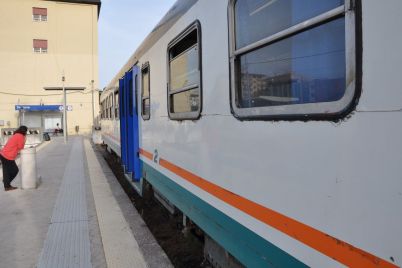 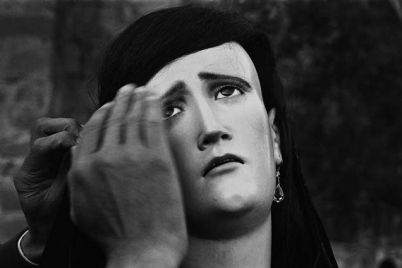 Mexico Through the Lens of Vincenzo Pietropaolo