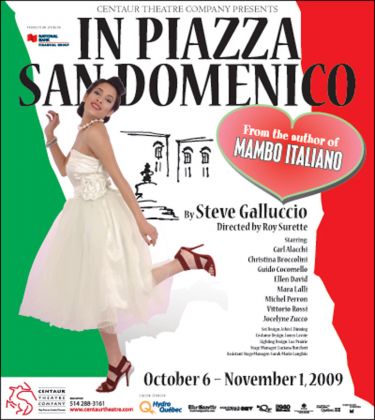 Mention the name Steve Galluccio and most people automatically think of the mega-hit play/movie Mambo Italiano. But to born-and-bred Montrealer Galluccio, who recently scored another Centaur Theatre hit with In Piazza San Domenico, Mambo was just another step in a career ladder that has seen him go from gonzo theatre camp comedy maven and French TV sitcom writer to the creator of feature films that includes the forthcoming darkly-flavoured Funkytown, set in disco-era Montreal.

“I look at my projects so individually,” he said during an interview at a downtown Montreal coffee shop. “We talk about Mambo but to me that was a lifetime ago. I usually go to something else after a particular project. What Mambo did do is open a lot of doors for me in Quebec.”

With writing that ranges from mindless slapstick comedy to more serious social concerns (such as the coming out of gay sons in Italian families), Galluccio doesn’t feel the need to be pinned down. It might just be this genre-bending ability that has served him so well and that has allowed him to do something most other Canadian writers can only dream about – and that is to make a living from his writing. His success has also allowed him to thumb his nose at criticism.

Galluccio is adamant that entertainment and making sure audiences enjoy themselves, rather than the sending out of social messages, is his main concern. For Mambo, for instance, he is quick to deny the idea that he set out to write the play as a way to get some sort of dialogue going on the subject of homosexuality within the Italian community.

“In Texas, there was this 15-year-old boy who brought his mom to see Mambo. He was Italian and he’d told his mom that he was gay. The main characters in the play were Angelo and Nino … and Nino was the one who stayed in the closet. At the end of the play, the boy’s mom took him out to dinner and she looked at him and said: ‘You know what … I don’t want you to be like Nino; I want you to be like Angelo.'”

Galluccio’s own relationship with the Italian community in Montreal has always been an ambivalent one. Unlike many Italian-Canadian writers, he has not aligned himself exclusively with either the French- or English-speaking members of the community. Despite this, Galluccio does admit to the influence of his hybrid Italian-Canadian heritage in his writing.

“When I started, I was doing a lot of independent theatre and the Italian factor didn’t enter at all,” he said. “But there were always one or two Italian characters and there’s an Italian way of thinking in all my work. I didn’t set out to be an ‘Italian’ writer. It just happened that way with Mambo.

“In my 20s and 30s I was having a hard time with my Italian identity. I really didn’t want to be defined by it and I wasn’t really too interested in it. Now as I get older I’m more and more interested in the history of Italians in Montreal and more appreciative of my heritage. But it took me a long time to actually cop to the fact I was Italian.”

Part of Galluccio’s love/hate relationship with the Italian community in Montreal has to do with what he feels is the unnecessary fragmentation within that community.

“I don’t know where the Italian community is,” he said. “I know that it’s in Little Italy but I don’t know what’s going on half of the time. Everybody seems to have an agenda. I’m very grassroots. I’ve been asked a couple of times to do something and it was never very clear as to why this was being done or what was going on. There always seemed to be another agenda going on.”

But he is always willing to chip in if asked … as he did this past summer at La Settimana Italiana where he participated in a roundtable discussion on the fate of Little Italy.

“La Settimana Italiana was really cool,” he said. “I get involved to that capacity. Someone asks and I’ll be there. I do it with great pleasure.”

While Galluccio says the Italian community has been supportive of him in terms of going to see his plays and movies, he chides them when it comes to supporting the arts in general – and when the artists really need that support.

“During the making of Mambo, when we asked for some Italian sponsorship,” he said, “we got nothing. Afterwards, after its success, they wanted to give us money. But then it was like: ‘It’s too late now. You know, it’s like we asked for some money before.’ Actually, we did get some support in St. Leonard. This guy owned a hall and he gave us his hall. Gave us a bunch of stuff. So we filmed in his house. That was very supportive.”

Galluccio has benefitted greatly from the fact he is perfectly bilingual and writes in both English and French. In fact, even before Mambo was a hit at the Centaur Theatre, a French version had already paved the way, thanks to a translation by Michel Tremblay. Now, with In Piazza San Domenico, the English version at Centaur will be followed next year by a French version, again translated by Tremblay.

Meanwhile, Galluccio intends on keeping busy. Aside from preparing for the release of Funkytown in the summer of 2010, he has several projects on the go, including the possibility of Mambo being done as a musical Off-Broadway, and a TV series in the works about an Italian family. This is one writer who prides himself on making a living from his writing and he wants to keep it that way.

Michael Mirolla is a freelance journalist and writer, currently editor at Roverarts.com, a web site covering the Montreal arts scene.

He is also associate editor at Accenti.