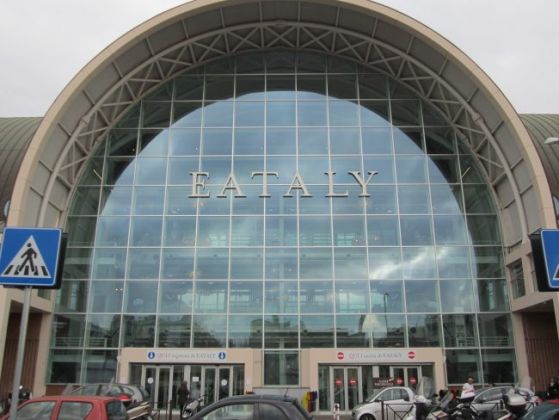 In his recent effort to return to power, former Italian premier Silvio Berlusconi said that there is no recession in Italy because all the restaurants are full. In a land that puts so much emphasis on its cuisine, are restaurants really the best measure of the country’s economic health? Food is everywhere and always will be. I can’t imagine that ever changing. When visiting the Eternal City or any other more earthly Italian town or village, my wife Carole and I pursue the local dish as avidly as we seek out the local church or museum.

This past January, in an early afternoon reconnaissance visit to one of our favourite restaurants, to reassure ourselves that nothing in Rome had changed, we found that it was gone. In contradiction to Berlusconi‘s upbeat mantra, it became a victim of Italy’s recession. For decades Hugo and Maria’s had been the familiar spot for us in the chaos of modern Rome. Ironically, it was a place that we could not recommend for its cuisine. Its single-page menu of three or four first and second courses had not changed for decades, while its nearby competitors had designed menus that looked more like complete folio editions of Shakespeare‘s works, replete, of course, with translations in four or five languages. 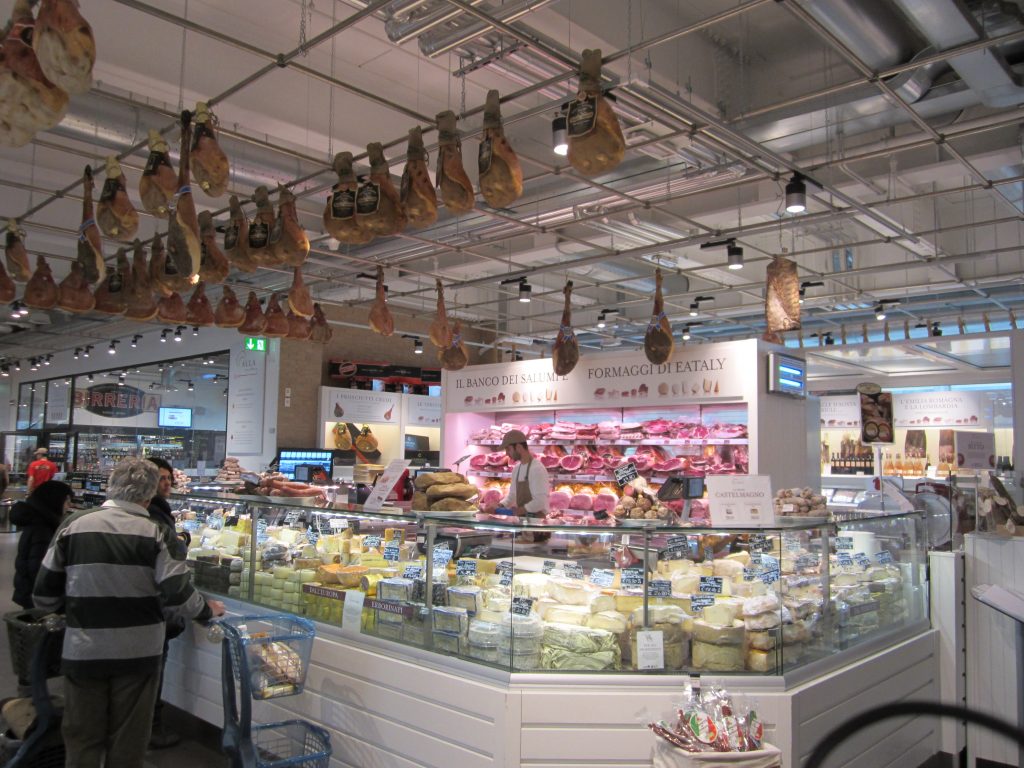 Hugo and Maria’s was an acquired taste, not for its food, but rather for its typically, old-fashioned menu and service. When you walked in, Hugo’s always quizzical expression forced you to explain why you were in his restaurant at dinner time. Why, one cold and rainy January evening when we stepped into the restaurant, with half its tables empty, we were told to come back in twenty minutes. The kitchen inexplicably was backed up. When we dutifully returned, we were seated without apologies. That’s what I call slow food.

We had noticed over the last several years that even on a Saturday night, Hugo and Maria’s was never full. This January when we went by and looked up for the familiar but hardly noticeable sign, Trattoria, it was gone. A green for-lease sign had replaced the one-page menu to the left of the newly installed metal door. The temporal had triumphed in the Eternal City. But rest assured, Berlusconi told his viewing audience only recently on television, that this was Monti’s fault or most certainly the Communists’ doing. I felt reassured: in times of rapid change, we will always have Italian politics. 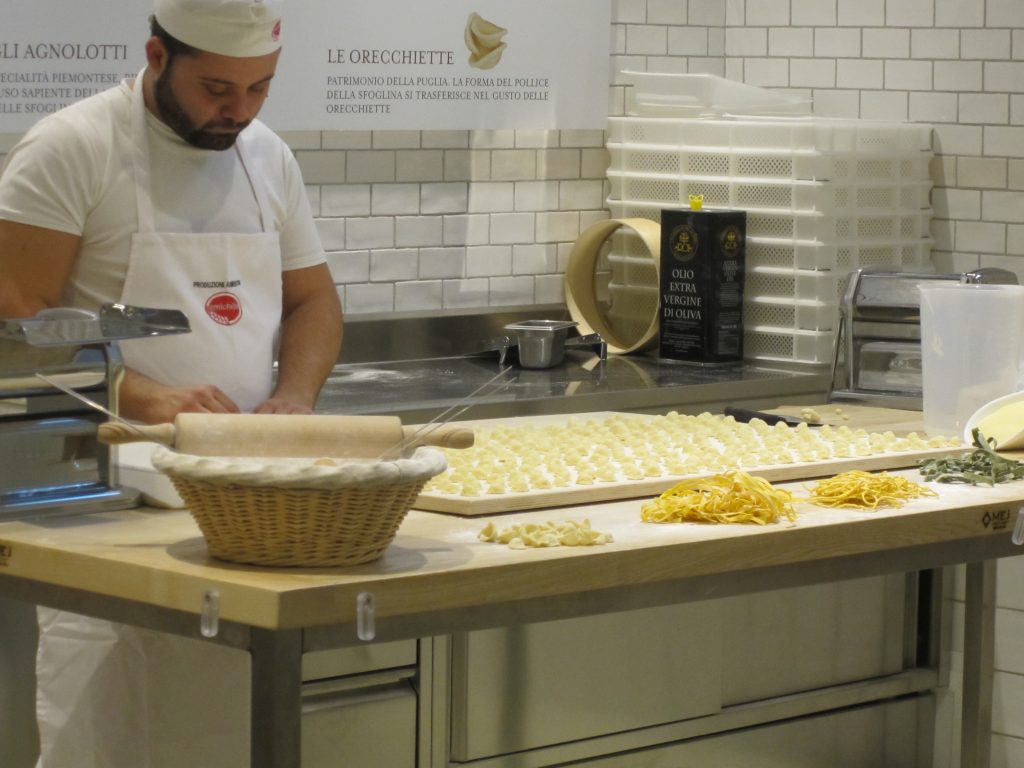 So we had to move on: to the new in Rome, in spite of our nostalgia for Hugo and Maria’s slow service, limited choice, and higher than justified prices. To my surprise and delight, I learned that Rome’s Eataly had just opened the previous June. In a way, Hugo and Maria’s old-fashioned, original slow food had found a place in the modern Slow Food Movement.

The new Eataly is south of the cultural centre just behind Rome’s Stazione Ostiense. The largest of Eataly’s nineteen sites (including ten outside of Italy), it is located in an abandoned train station. But the site has a reassuring history, reminding me again that some things don’t change in Italy. The station was built in 1990 when Italy hosted the World Cup Soccer final. The station was completed, but it was never opened. Until two years ago when Eataly began its remodelling of the 200,000 square-foot space, it sat vacant, occupied only by Rome’s homeless. When I heard the history of the space, I felt that warm glow of reassurance once again. Who made money on that deal? For sure, the homeless lost another round.

So here we have it, the merging of the old and the new. Eataly’s glass and steel exterior glistens even on a cloudy Italian winter day, while its four-story interior design is both functional and aesthetic. Inside, twelve and fifteen-inch exposed I-beams with their iron rivets carry the load of its three stories. The stainless steel air ducts that run throughout the building add further to the structure’s modern polish and shine. The visitor reaches the upper stories either by glass-walled elevators that provide a quick glimpse of Rome from the north side or, just as dramatically, by slow-moving, gently-sloped opposite-facing walkways situated in the centre of each floor that also allow the shopper to easily return for checkout.

As their pilgrim churches with their wide promenades demonstrate, Italians have always had a good sense of how to keep tourist crowds moving efficiently, whether the objective is to venerate the ossified bones of saints or to buy fresh pork ribs or veal chops. Italian highways on Ferragosto would, of course, be the exception.

In spite of what is obviously millions in investment, Rome’s Eataly is not an overpriced tourist attraction whose form outweighs its substance. It is yet another location of the growing Slow Food Movement: support for local production, from farming to the artisanal production of food, from pastas and cured meats to cheeses. There are approximately twenty different stations where the visitor can eat and imbibe. The white-clad workers behind the pasta counter churn out more than fifty different fresh pastas daily, while at the other end of the same floor workers make mozzarella behind glass partitions. The visitor can watch muscular men stir the white grainy concupiscent curds in the stainless steel vat until they mysteriously turn into taffy-like strands of mozzarella that they tear from its congealed mass and form into those familiar mozzarella balls. They drop them into a rectangular stainless-steel vat of whey where they bob like so many apples before they are packaged.

True, as some critics have pointed out, in an age when the small Italian shop owner is being driven out by an international market economy, Eataly is just another version of a large supermarket. Yes, at over 200,000 square feet, it is large. It features a grocery section of fruits and vegetables, as well as a section well stocked with a wide selection of gourmet jars of sauces and marmalades, including more than thirty different table salts. Just to make their home-grown point, there is actually a large planter in the vegetable section where the staff grows vegetables.

Like the first-time visitor entering one of Rome’s baroque churches, it is a bit overwhelming. Where do you begin to look? It would take many visits to digest it all, to feel comfortable among such variety. But judging from the shoppers around us, Eataly is not there just for the idle foodie or the tourist.

In spite of its large size and media image fuelled by its celebrity chefs, it is still a local phenomenon. Like Turin’s smaller version, the Rome site is a neighbourhood affair, at least for part of its revenue. Its customers live in the surrounding area. I cannot say how many tour buses arrive during the high season, but on the two cold January afternoons we visited, it is clear that locals come here to shop and eat – cheaply, if they are watching their budgets in these hard times. The grocery prices as well as the food service prices at the restaurants are not excessive. Yes, in the wine shop you can buy that 1961 Barolo you have been searching for, for 600 euro. But two steps away you can also fill your empty 1.5 litre plastic water bottle with wine, red or white, for a mere 2 euro.

There are about fifteen or twenty separate spaces where you can eat, from the mozzarella bar to fried fish, pizza, pasta, salad, sandwich, and dessert spaces – including one beer and two coffee bars. For lunch you can have an inexpensive pizza at the bar or have it delivered to your table.For dinner you can begin with a pasta dish, move to the fish space as your main course, and end with desert and coffee. It is like eating anywhere in Italy: if you know how to do it, you can eat and drink cheaply.

But politics seems never to be far from anything in Italy. In the first place, the Slow Food Movement is a bulwark against the commercialization of food, otherwise known as American fast food or, more recently, Eurozone regulations. Throughout, workers wear t-shirts with a variety of slogans, such as facciamo cose buone [we make good food] or la vita è troppo breve per mangiare e bere male [life is too short to eat and drink badly].Illy’s coffee bar is distinguished by its slogan, “live hap   pily,” as well as its impressive espresso cup chandelier.

There are several video screens placed strategically throughout the restaurant level that feature a list of what can only be described as product info videos, but not to promote a product. Rather, each features an artisan producer explaining his or her product, from the origin of the recipe for pasta carbonara to the local production of cheese, from the grass the sheep eat to the making of the cheese on the presenter‘s third-generation family farm. 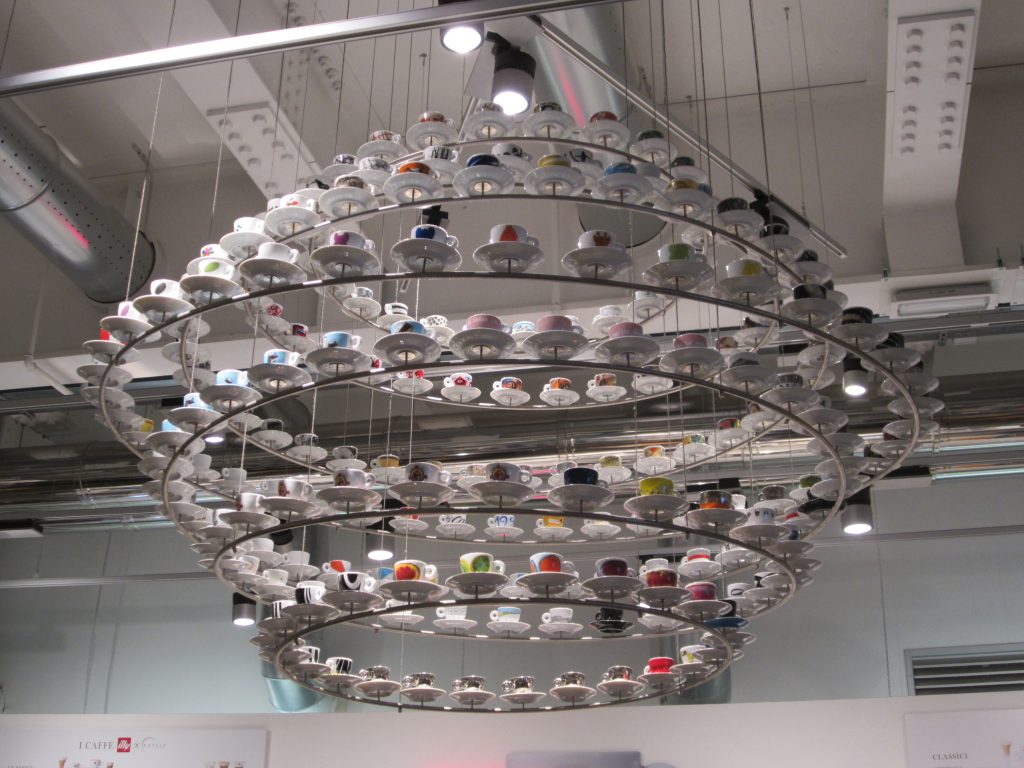 But Eataly’s politics does not end with its challenge to corporate food production. Currently, the unemployment rate for 18 to 35 year-old Italians is over 35%. They still sleep in the bedrooms in their parents’ homes where they grew up. To the chagrin of one Corriere della Sera editorial writer, they are far too content, more so than their unemployed Spanish and Greek counterparts, who have taken to the streets against their governments. According to that writer, apparently, there is no underestimating the power of a home-cooked meal to sweeten the taste of a sour economy.

As we looked at the corps of workers, servers, and chefs, none appeared to be much older than twenty-five or thirty. I cannot say anything about the salary scale, but at least these are young people who at an early age are gaining work experience and in some cases are learning a valuable culinary craft in restaurant management and food production. It could be argued that the food industry in Italy has a future, even if those old-fashioned Hugo and Maria restaurants cannot compete.

For a generation of young people who have taken such a hit over the last decade, there is a growing need for chefs to design the contents of those folio-sized multilingual menus, and for servers to work in all those restaurants. According to Berlusconi, they are not only full, they will soon be overflowing. For once, we can only hope that he is right. Of course, the only question is who will get the credit, certainly not the Communists or Monti.

Kenneth Scambray’s published works include A Varied Harvest: The Life and Works of Henry Blake Fuller (1987) and Queen Calafia’s Paradise: California and the Italian American Novel (2007). He is the editor of Pasquale Verdicchio: Essays on His Works (Guernica Editions, forthcoming). 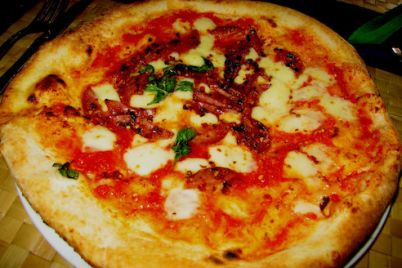 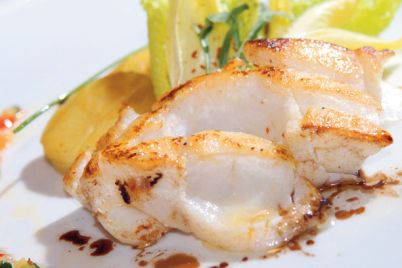