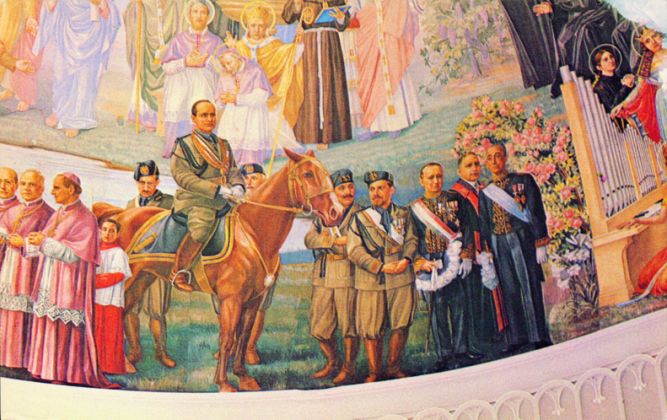 Last November 30, Canadian Heritage Minister Sheila Copps, in a simple but meaningful ceremony, designated Madonna della Difesa Church, in the heart of Montreal’s Little Italy, a national historic site. “For the last 80 years, “Copps said, “Madonna della Difesa has been at the centre of the life of Montreal Italians. It has enabled the immigrants arriving from Italy to maintain their own culture while becoming part, at the same time, of the social Canadian context.”

Madonna della Difesa was recognized as a distinct parish in 1910 by Montreal archbishop Paul Bruchesi. The Church building was completed in 1919 based on the plans of a parishioner, painter and architect Guido Nincheri, originally from Prato, a town in Tuscany.

The name Madonna della Difesa came about because a sizable number of the parishioners were originally from the small town of Casacalenda, in the Italian region of Molise, where a few years earlier, in a place named Difesa, the Holy Virgin had appeared. The name was chosen as a sign of devotion to the Virgin.

Madonna della Difesa Church, a truly unique work, is one of the master works of the talented Guido Nincheri. Throughout the 1920s and 1930s, this artist covered the walls and spacious vault behind the main altar with frescos, a technique of painting used by the ancient Romans and imitated by Quattrocento Tuscan painters. Nincheri’s style is overtly reminiscent of the Preraphaelites, a school of painting that flourished in England towards the middle of the nineteenth century – particularly in the works of Dante Gabriel Rossetti. The iconography is evidently religious, but several scenes of the vault illustrate episodes in Canadian history, in particular the role played by missionaries in the christening of the Native populations. There is a detail depicting the civil authorities, among them Benito Mussolini riding a horse, that has been a source of controversy since 1933.

Guido Nincheri died in Montreal in 1973. In the last 25 years his importance as an artist has grown. Today, he is considered a major figure in the history of figurative and religious art in Canada. Montreal is home to three of Nincheri’s most important works. The first is the Church of Saint Leon in Westmount; the second is the Chateau Dufresne – a late-Renaissance style palazzo in east-end Montreal built for a French-Canadian shoe-making tycoon; the third is the Madonna della Difesa Church.

The common denominator in these three works is a mix of sacred and profane iconographic and decorative elements. Inside Saint Leon Church, there is a detail on the vault that shows Attila the Hun riding a horse, being stopped from destroying Rome by Pope Leo brandishing a cross. The Chateau Dufresne caters to what must have been the neo-pagan taste of the patron who had it built. The mansion is almost a carbon copy of Italian Renaissance and Baroque palazzi; its walls are covered with lascivious nymphs and satyrs in a bucolic landscape reminiscent of the Tuscan countryside. Today, it is fittingly used as a museum. In Madonna della Difesa Church the magnificent fresco that covers the vault behind the main altar is really striking, and even more so for a detail which depicts Benito Mussolini riding a horse surrounded by the quadrumviri who had participated in the 1922 March on Rome – a coup d’etat which enabled the Duce to seize power and found his Fascist regime.

This detail, painted by Nincheri between 1930 and 1933, depicts the signing in 1929 of a truce (the Lateran Pact or Concordato) between the Italian State and the Catholic Church which made Catholicism the official religion of Italy and allowed the pope to become the temporal leader of the Vatican State. At the time, Canadians in general and the very Catholic Qu补cois saw nothing in the fresco to offend them; in fact, many celebrated Mussolini’s statesmanship. If Mussolini is the source of controversy today, much has to do with his catastrophic alliance with Hitler during World War II. The historical meaning of Mussolini’s image inside Madonna della Difesa Church is to be sought consequently within the mystical fervour that the Concordato had produced worldwide in every Catholic nation.

Between 1922 and 1936 Mussolini’s reputation in Canada was that of a statesman sent by Divine Providence to defend the western world against the communist threat. Canadian Prime Minister L. Mackenzie King and his British colleague Winston Churchill had both expressed the opinion that Mussolini was one of the great political leaders of his time.

In the 1930s, Canadians of Italian origin numbered approximately 112,000 and constituted the twelfth largest ethnic component in the country. Montreal’s Italian community, about 30,000 strong, was then Canada’s biggest. Italian Canadians were seen as undesirables, except as labourers, and were often the target of veiled forms of discrimination. The prestige that Mussolini enjoyed on the world scene became a source of pride for Italian Canadians.

For about 15 years, Benito Mussolini enjoyed an excellent reputation in Canada (then still a quasi-British colony), in the United Kingdom itself and in the United States of America. It is only in 1936, when Italy conquered Ethiopia and when England’s geo-political interests in the Horn of Africa were threatened by the Italian presence, that the English-Canadian media – along with Britain’s – began to harden its tone towards Fascism. Quebec’s French-language media had a diametrically opposed interpretation of the Italian conquest of Ethiopia.

Mussolini and Hitler’s help to Francisco Franco during the Spanish Civil War and the signing of the Pact of Steel between Mussolini and Hitler in 1938 were turning points for public opinion in English Canada. Germany’s invasion of Poland in September 1939 and its sudden and unexpected defeat of France by June 1940 led Mussolini to declare war on England, France and Canada.

June 10, 1940, is remembered as the darkest day in the history of the Italian presence in Canada. About 700 persons, the elite of the communities from Halifax to Vancouver, most of them naturalized or Canadian-born citizens, were arrested and labelled “enemy aliens”; the habeas corpus was suspended and their civil liberties disregarded.

They were deemed individuals susceptible of committing acts of sabotage or liable to betray Canada. The Canadian government invoked the War Measures Act, as it had done during World War I against Canadians of Austrian, German and Ukranian origin, and arrested them and put them in internment camps, many for the duration of the war.

The enduring image of Fascism, especially in North America, is conditioned by the outcome of the last world war. Fascism and Nazism are equated and equally condemned. European historiography, especially in Italy, through the research of scholars such as the Italian Jew Renzo De Felice, however is more sophisticated, expressing a less harsh judgement of Fascism as compared to Nazism. The media in the English-speaking world are less subtle in their analysis and still express a politically correct view of the events.

Proof of this attitude is the almost hysterical reaction in some quarters. A front-page article published in The Globe and Mail on August 27, 2002, concerning Madonna della Difesa Church openly questions whether government funds should go to restore “Mussolini’s fresco,” thereby sidestepping the entire historical and social significance of the Church and the need for its restoration.

Even some Italian-Canadian historians and a respected Member of Parliament from the Toronto area expressed their opposition to designating the Difesa a national historic site. Historically, this opposition is explainable but is no longer justifiable, if we take into account the specific context that has produced Mussolini’s fresco.

Some people out of spite, simple ignorance, mental laziness, conformism or self-interest, prefer to accept and defend a view point that expresses only part of the historical truth. The temptation to give a black-and-white, irreconcilable judgement between good and evil grows if we keep on taking, after more than 60 years, an ideological, politically correct stance towards the events of World War II.

The vast majority of Italian Canadians sees Madonna della Difesa Church, even with its Mussolini detail, as part of their own history and rightly agree that it be acknowledged as national historic site. The history of a nation has to be accepted for what it is, whether we like it or not. Let us be wary, for today’s inquisitors – especially the “cultural talibans” – may be tomorrow’s victims. Maneat Dux in ecclesia et gratias agamus.

Filippo Salvatore is professor of Italian Studies at Concordia University in Montreal.

I Left My Heart in Campania