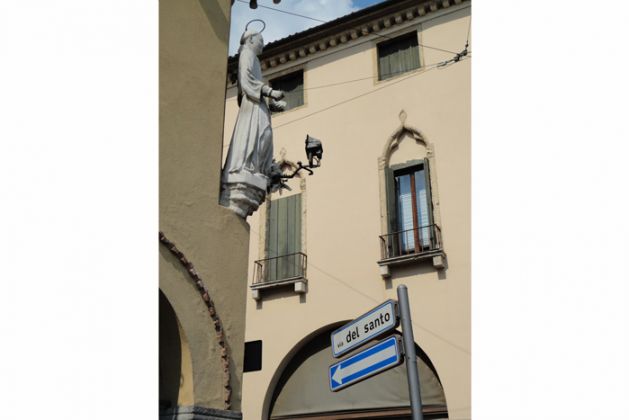 The first I saw of Rome was no different than the last I saw of it three years ago. The persistent chaos at Fiumicino, then at Termini, was familiar and, more importantly, happy. There is no reason for me to feel so instantly at home there or, in truth, almost anywhere on the peninsula. I have never lived there for an extended period of time. My academic pursuits aside, I have no practical business there. I am not Italian, at least not as far as Italians are concerned. Still, I can conceive of being nothing else.

I was born and raised in Quebec. My teachers taught me to be Canadian and waved their banners of national pride as if they were – exclusively – also mine to brandish. Something in me remained unconvinced. Three years studying in the US (pursuing a Ph.D. in Italian literature) further challenged my assumed Franco-Canadian identity, but offered no alternative to it. It took me twenty-seven years, ten years of study, and five memorable trips to Italy to understand: home is a space that revealed itself to me in 2001 during my first “real” trip to the land of my roots. Despite my occasional forgetting – feeling like I belong to the North American society that houses me requires an impressive denial of instinct – it never takes more than a customary train delay or bureaucratic inconvenience anywhere south of the Alps to remind me of why I am alive.

That is not to call the case cold. Landing in Italy almost immediately alerts me – again, each time – to the many ways in which I am decidedly un-Italian. For starters, Italians amble pleasantly at a pace categorically prohibited by my metropolitan upbringing and lifestyle; even in July in Sicily, I find myself more frequently keeping stride with motorini than with pedestrians. Italians’ sense of fashion, though vastly different one region – even one city – to the next, is easily acquired if I want it (and I don’t always), but their sense of humour, though I have planned and given lessons about it to undergraduate students, is still a mystery to me. We don’t always speak the same language, even when we are speaking the same language. We enjoy the same foods but don’t always agree on the integrity of leftovers or their preparation. Perhaps more saliently, we are products of superficially similar but fundamentally different governmental systems, and have only nominal familiarity with the broad strokes of each other’s national political problems. Still, very late on a Thursday evening, it seems more natural to me to be sharing carne equina at an unassuming paninoteca in the-middle-of-nowhere Nicolosi with a near-stranger, than to be at any of Montreal’s world-class eateries among my native Quebeckers.

My Italo-Canadian upbringing has little to do with it. Indeed – surprisingly – the Italo portion of my identity is often just as jarring to native Italian friends and acquaintances as the Canadian portion of it is – and differentiates me from them to the same degree. The traditions and customs championed by my parents (and by other Italian immigrants of their generation) and so central to my early development are not only outdated, but often long-forgotten in their homeland. The norms of acceptable social behaviour have changed throughout Italy from what they were when my family left it. The dialect we so jealously protect has by now fallen almost completely out of use. The stereotypes many Montreal Italians continue to celebrate are precisely that: stereotypes. Italy has moved on in a way many of the people that left it fifty years ago have been unable to.

Yet, anyone who has been there will readily admit that Italy is still very much a land of tradition. How could it not be? Vatican City rests at its centre and its sway is still undeniable. The values once associated strictly with the Catholic Church – the importance of family and honest work – persist, but in secularised versions, where children may continue to live with their parents into their thirties not because it is culturally customary to do so, but because increasing demands on limited space in precarious financial times require it; where an unstable job market means an unstable future; where social injustice rather than genetic predisposition provokes passionate public outbursts. Yes, in so many ways, Italians are exactly the people we Italo-Canadians proudly paint them to be – but for reasons other than the ones we superficially assume or display.

Italy, especially southern Italy, has a long history of class struggle and social unrest – a history that has contributed to the country’s national fabric and one that is reflected not only in the resilience of its citizens, but in much of the art they have produced over the past six decades, Italian neorealism being its most notable example. It is a history that explains not only Italy’s past but also, and just as importantly, its present: a history all too often forgotten, muted by the noise of World Cup cheers, and muffled in the enjoyment of a Sunday afternoon cannolo at nonna’s. It is making contact with this history and with the many ways in which it continues to affect Italians that links me to them in the sincerest way.

Meeting my Roman hostess in May, an editorial journalist, or my roommates in Florence weeks later, both young geologists, I was reminded of the many reasons why, since 2001, I have felt so tied to a country not legitimately my own. It went beyond my cultural acquaintance with their public figures, musicians, and actors, their national art and literature. It went beyond my familiarity with their cuisine and local customs. It even went beyond my appreciation of their exquisitely beautiful country – one I gladly shared with many B&B owners throughout my travels. What made me feel at home among them was only in part the hospitality you might expect from Italians, and in larger part, the values common to a generation with goals not always shared by my Canadian peers: the struggle against nepotism in a decreasingly meritocratic system, the quest for governmental responsibility, and the importance of laughter, celebration, and gelato breaks in the midst of the surrounding confusion.

Tania Zampini, a Montreal native, is currently completing her Ph.D. in Italian Literature at John Hopkins University in Baltimore.