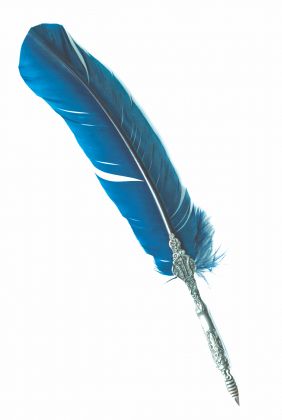 It will come as no surprise to learn that  I am not Italian Canadian. I regret to say I’m not  even an honourary Italian –  one of those Canadians who  has spent a lot of time in Italy  and learned Italian and studied Italian literature and culture. Italy is, however, an ideal to me, a symbol of art and creation and beauty and high culture – an ideal confirmed by my too-slight acquaintance with Italy itself.

As the founder and artistic director of Blue Metropolis Foundation, it has been a great pleasure to include Italians and Italian Canadians in the annual Blue Metropolis Montreal International Literary Festival. Blue Metropolis is a successful festival for many reasons, including the fact that it has become a collaborative effort. From the start, it was different from other literary festivals – an experiment in bringing people of different cultures together to share the pleasures of reading and writing. It was already unique in its first year, in 1999, when it took place in French and in English. As it grew, it started including writers who work in Italian, Spanish, Farsi, Arabic, Russian, Chinese and other languages. Most of the festival still takes place in French and English, but there are many events in other languages and we publicize these to the communities that speak those languages. Instead of translating the Italian (or dialect) into French and/or English, we go out of our way to bring in the public that will understand and appreciate such an event.

Some years ago, Blue Met was contacted by Connie Guzzo McParland of the Association of Italian Canadian Writers, and the result was an increased presence of Italian Canadian authors at Blue Met. At around the same time we also started working with Accenti Magazine: for the last five years the Accenti Magazine Awards have been held at the Blue Metropolis Festival. We had already been collaborating with the Istituto Italiano di Cultura in Montreal, and a number of Italian and Italian Canadian writers had participated in our Festival. As a result of these collaborations, our “Metropolis Azzurro” program now includes more exciting events – in English, French, Italian as well as a few Italian dialects – and we now have a larger Italian Canadian public.

Over the years, Metropolis Azzurro has included nearly 50 Italian Canadians and half a dozen Italian writers in more than 20 different events. One of the highlights came in April 2008 as a result of a partnership with PEN World Voices in New York, which led to the participation of best-selling Italian author Roberto Saviano (Gomorra) in two packed Blue Met events – one in English and Italian, and the other in French and Italian. Many in the audience were Italian Canadians who had come to know the Festival and its interest in Italian and Italian-Canadian writing.

Metropolis Azzurro will continue to grow. In the near future we hope to establish an annual Metropolis Azzurro Literary Prize – or prizes, for work by writers of Italian nationality or heritage or both. The prizes – it is not yet clear whether this will be one prize or two different prizes – will raise the profile of Italian and of Italian-Canadian writing.

And yet, I have the sense it’s not enough. I have the sense that Italian Canadian writers want even more. More attention, more media, more visibility. I understand. I feel the same way. In fact, I can’t think of a single writer who doesn’t feel that way.

Most writers think they are getting too little attention – Asians, Arabs, Gays, Lesbians and Anglophone Quebecers, and so on. So who are the privileged among us? Miscellaneous white English Canadians of no particular ethnic background, whoever they might be? Are they the ones who are privileged?

White English-Canadian women of no particular ethnic background, you may be interested to know, actually feel they were slighted by the Giller Prize long-list, and I had an irate message from one woman hoping to persuade me to raise the money for a prize similar to the Orange prize in England, to honour women writers. She wanted to call it the Apple prize. And, for good measure, white males are feeling cheated, too, thinking the world is too interested in female writers, since so many readers are in fact women. One man, in his thirties, seriously proposed a literary event with other writers, men of about the same age. They wished, somewhat bitterly, to bill this event, “Dead White Males.”

Where is the writer who feels she or he has been adequately appreciated and her or his work adequately recognized? Isn’t there always some mountain yet to climb? If there is one thing I’ve learned from reading about – and working with – writers, it is that dissatisfaction is an occupational hazard.

There is always room for complaint, much of it legitimate, but there is also good news. Blue Metropolis has become a symbol of openness and diversity. We do our best to be in the good news category.