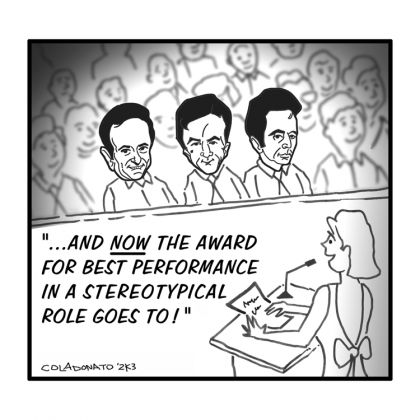 In 1972, Francis Ford Coppola’s controversial screen adaptation of Mario Puzo’s best-selling novel The Godfather opened in theatres across North America to overwhelming critical and popular acclaim. The Godfather’s success, like it or not, married, even more solidly, all Italians to the mobster mystique.

In Hollywood, an opportunistic film industry followed its success with a slew of spin-off and rip-off variations which continues to this day, the most recent finding form in the HBO series The Sopranos.

According to Bill Dal Cerro of the Italic Studies Institute in New York, between the beginning of the sound era in 1928 and 2001, some 1,220 films containing Italian characters or themes were produced in Hollywood. Of these, 374 or 31% portray Italians in a positive light. The other 846 or 69% portray Italians negatively.

Of the 846 negative films, 487 portray Italians as mobsters. The other 359 films portray Italians as boors, buffoons, bigots or bimbos. Now, just in case you are thinking that it should make sense for the majority of films about Italians to contain mobsters because Italians are, after all, well-connected, maybe you’ve been watching too much TV! The 1990 US census shows that there were 14.7 million Italian Americans living in the United States. According to the 1999 FBI statistics, only 1,150 of those were convicted criminals. That is .0078% of the total Italian American population. In Canada according to Toronto Police Chief Julian Fantino, statistics show that less than .02% of all Canadians of Italian heritage are criminals. Therefore, in both countries the statistics show that an overwhelming majority – one can safely say 99.9% – of Italians have always been and continue to be honest, law-abiding citizens. Yet, somehow, this literal and factual reality is ignored and becomes irrelevant when obliterated by the mythical reality produced through American film culture over the past seventy-five years.

In 1977 and 1979, our own CBC television weighed in with the production of two documentary series titled Connections I and Connections II. These series were presented as documentaries on organized crime in Canada. However, once aired they proved to be filled with innuendo directed predominantly against Italian Canadians. A Gallup poll conducted one month after the airing of the Connections II series confirmed the Italian Canadian community’s apprehension over the series, at the time expressed in country-wide protests and numerous lawsuits. Fully 40% of Canadians linked Italians with crime. More disturbing, of those who viewed the CBC program, 47% made the link, compared to 37% who had not seen it.

The rules that North American mainstream media establishes for how it represents Italians on the big and small screen are overwhelmingly one-dimensional. At the same time, mainstream cultural institutions and cultural “authorities” have the power to render invisible and inaudible the diverse images, stories, and voices of ethno-racial minority communities, their artists, and their activists.

Some Italian Canadian artists working in film and video media have indeed absorbed and sometimes even reproduced the same negative stereotypes of Italian culture that the mainstream has presented them with. The most significant of these identifications is the love/hate relationship with the mafia.

The result of this erasure and oversimplification, of course, is that Italian Canadian film and video artists produce within a context of obfuscation where mainstream representation is of a commodified Italian culture.

A case in point is the recent controversy involving Canadian actor and two-time Genie Award winner Tony Nardi (La Sarrasine 1992, My Father’s Angel 1999). After Nardi refused to audition for the role of a “greaseball mafioso” in a movie-of-the-week project, the movie’s casting director allegedly threatened to boycott Nardi’s agent (and all the actors she represents) unless she would talk Nardi back into the audition. Refusing to be coerced, Nardi left his agent and responded: “I am not a professional Italian, I’m a professional actor. I’m not ashamed to be Italian. On the contrary. It’s playing a cultural stereotype I have a problem with… No one should stand for this… and being asked to give in is worse.”

Since Nardi’s story emerged, other actors have come forward to complain about alleged misconduct and misrepresentation. Actors are thus torn between the need to support their family and accepting roles which portray stereotypical and unimaginative views of Italians. Says critic Joseph Pivato, “we have often suspected that many Italian-Canadian and Italian-American actors did not voluntarily play all those stereotypical mafia roles. Now, thanks to the courage of Tony Nardi and others we know that some are coerced into those despicable roles against their own conscience and the protests of their own communities.”

But beyond the surveys, the statistics and the controversies within the entertainment industry, there are very real and tangible detrimental social consequences resulting from the constant and determined “mafia mystique” media barrage, which cannot be dismissed out of hand. The message being conveyed is that to be Italian or of Italian descent is to somehow be a mobster, no matter what one does for a living; and there are countless examples to illustrate the point.

In Edmonton, in a recent state-of-the-city address, Mayor Bill Smith compares Primo Nebiolo, the late president of the International Amateur Athletic Federation, to Benito Mussolini and a mafia boss.

In Parliament, former Montreal MP and minister of Public Works Alfonso Gagliano is accused of having mafia connections. An opposition MP hums the theme from The Godfather while Gagliano is speaking.

In the United States, President George W. Bush declares war on terrorism, following the horrific events of September 11, 2001. “[Al-Qaida] terrorists are to terror what the Mafia is to crime,” says Bush, certainly unaware of the slight to North America’s 16 million Italians.

The use of the “mafia joke” is still very popular, still offensive and still being used within the world of politics as well as written and visual media. Political scientist Michael Parenti notes that “every Italian American knows persons who would never utter a racist or sexist remark who seem to think themselves clever when making a joking reference about the Mafioso in our presence. It is one of those forms of bigotry that remains quite respectable.”

In the world of business, in both Canada and the United States, a plethora of mobster-themed advertising has appeared in the past few years. These “business ventures” continue to be challenged by Italian North American individuals and organizations. Italian diasporic communities continue to challenge the mainstream in order to receive the same respect that would be given to other ethnic groups whose stereotypes seem to receive more understanding. B’Nai Brith and the Jewish Congress successfully lobbied to remove The Merchant of Venice from Ontario Secondary School curricula because of the character Shylock. Last year the Puerto Rican community in New York protested the stereotypical portrayal of Latinos as murderous rapists on a two-part episode of Law and Order. The first episode aired, but because of community protest, the second part was shelved and not screened in Canada or the United States. For Italians in Canada, a double standard seems to exist.

We need to challenge and move beyond the stereotypical and narrow limits of the Italian characters we have mostly seen on our television and film screens. We need to give The Godfather, a big bacio goodbye, and bury the boors, buffoons, bigots and bimbos if we are to truly create new mythological heroes and complex, profound, and multi-layered characters that are a reflection of our Italian Canadian lives.

Francesca L’Orfano is a visual artist, teacher and critic dividing her time between Ottawa and Toronto. 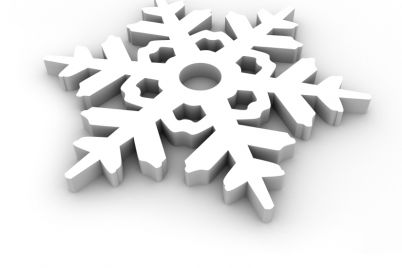