The Italian wedding in Canada has become a bit of a cliché. As a first-generation Italian Canadian, I’ve had both the pleasure and the misfortune of attending hundreds of weddings over the years. The result is that I can no longer distinguish one wedding for another. The memories all fade into one giant wedding with the same people that nobody – including the bride and groom – knows, the same food that everyone complains about, the same speeches that nobody listens to, and the same DJ that plays too many old Italian songs. Italian Canadian weddings are big and loud, and they will only get bigger and louder for generations to come. That’s the way it is, or so I thought.

One cold, winter’s day came an invitation from my cousin in Italy to be the official trans-Atlantic representative for my family at his wedding. Immediately, I started having visions of what an authentic Italian wedding would be like. My logic, although clearly flawed in retrospect, led me to conclude that if Italian culture in Canada is just a watered down version of the original, then Italian Canadian weddings are also watered down. A wedding in Italy, therefore, will probably make Mardi Gras look like a PTA meeting. I was bursting with excitement; I felt like a minor leaguer getting called-up to the Big Leagues. I was the Chosen One. I was Cinderella going to the Ball.

I spent the month leading up to the wedding agonizing over every possible wedding-related detail. I analyzed the ten-year trend in Italian fashion and bought a new suit accordingly. For the first time in my life, I found myself actually caring if the socks matched the shirt, and if the shoes matched the belt and tie. I memorized the words to “Ti Amo,” “Gloria,” and every Toto Cutugno song ever recorded. I was focused, I was pumped, I was ready. And when I finally went to the wedding, I was surprisingly disappointed.

Weddings in Italy are actually low-key, small and, well, simple. My cousin’s wedding was on a Sunday, which I initially thought was a typo on the invitation. Unbeknownst to me, however, a Sunday wedding is actually quite common in Italy because it is considered to be the luckiest day to get married. At first, the Sunday wedding felt very strange, like trick-or-treating the day after Halloween. The mass was at ten, the bride and groom took a few pictures, lunch was at two, a tarantella here, a tarantella there, and by eight o’clock everybody was back home. It was different, but it was nice. It was a celebration without the spectacle, and without the pretense. There was none of the glitter, much less glamour, and not one puff of dry ice.

For all my concern about attending weddings in the fashion capital of Europe, I was surprised to discover that many Italians consider weddings to be “dress-down” affairs. I saw guests in t-shirts and jeans, drawstring-pants and sandals, cargo pants and running shoes. I even saw one guy wearing yellow pants, a green shirt, and a red watch. Italians are strange people; they won’t wear track pants to go to the pharmacy, but they will wear drawstrings to a wedding. Oh Giorgio, where did it all go so wrong?

Besides their preference for stress-free wedding attire, Italian wedding guests are generally more relaxed and much less formal than their Italian Canadian counterparts. It’s not totally uncommon, for example, for a wedding guest to approach your table with a plastic bag and ask for any left-over chicken scraps that he might use to feed his three cats. It was funny and it was also charming, but if it ever happened here, someone would have called the police. I would have called the police.

I have since attended four weddings in Italy (one of which was even on a Thursday), and when all was said and done, I found myself resenting what weddings had become in Canada and embracing what weddings are in Italy. I couldn’t understand how far we had gone from something that was so meaningful and simple. In my eyes, Italian Canadian weddings had become caricatures of themselves, aimlessly repeating what had been done countless times before, but bigger each time. It took me some time to realize that this “matrimonial divide” was simply the natural evolution of a separated species.

Everything changes over time; cultures and traditions, people and places. For those who never left Italy, the rate of change happened slowly and organically; life went on relatively unabated. For those who left, everything changed quickly and unnaturally. Before the technological revolution, immigrants were almost completely cut off from their home. For those lucky enough to be literate, letters would not arrive for weeks or months at a time. The rest would have to wait for the rare opportunity to use a phone that sounded like it was connected by giant strings of wool. With no support, they could only move forward on their own.

I have a closet full of centre-pieces and bomboniere that I have no idea what to do with. Some of them, most of them, are so bad that I wouldn’t even sell them at a garage sale. I could re-gift them as a joke, but it wouldn’t be funny. It would be cruel. Indeed, many aspects of Italian Canadian weddings have gotten a little bit out of control. But it would be naive of anyone to think that we might one day be able to return to our roots and have Sunday weddings where everyone is wearing jeans and t-shirts. We have adapted to the life that our immigrant parents and grandparents always dreamed of.

We can no longer go back to how it was, it’s just not possible. If we can change our perspective slightly, however, perhaps we would see that immigrant weddings in Canada do more than just celebrate nuptials: they celebrate our place in this country, and they celebrate the struggles that were overcome so that we could exist and thrive. If we can do that, I might even keep a few of those bomboniere for myself.

“Going to the Chapel” won Second Prize at the Accenti Magazine Awards held during the Blue Metropolis Montreal International Literary Festival in April 2006.

Andrew De Angelis is a freelance writer in Toronto. After living in Milan, he has come to appreciate the fact that Italian Canadians are a people and a culture unto themselves. 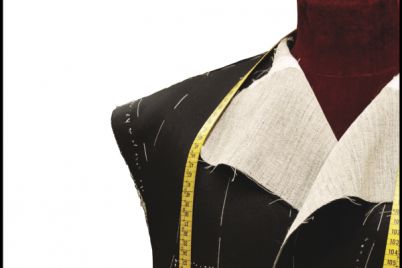