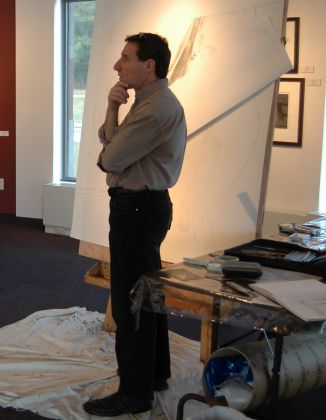 Giuseppe Di Leo emigrated from Foggia to Montreal with his family when he was a young boy. Typical of the generation of immigrants who grew up in the 1960s, he is trilingual and moves easily amongst the city’s neighbourhoods. But his facility with languages is not as remarkable as the pace with which the words race to keep up with his thoughts. This exuberant spontaneity seems a paradox compared to the artist’s style. The latter, on the contrary, reveals a deliberate, methodical, and disciplined hand, a careful eye trained at investigating the subtle nuances of the visible world. It’s an art that seems focused more on observation than expression. But Joe Di Leo’s realist style doesn’t simply transcribe the world; it takes reality and translates it into story and myth. Classical references merge with autobiography and fiction to become contemporary fables peopled by figures and objects that seem at once familiar and mysterious. Set in landscapes that function more like theatrical backdrops, the artist’s son or others close to him, become actors in existential parables about life and death.

I asked Joe where this attention to detail came from and he began by telling me about the apprenticeship he gained watching his mother, a seamstress, at her craft. Precision, pattern, shape, line, colour — tools of his future profession. He described how she would send him on errands to buy thread, and how he learned to match the subtleties of their colour. If in the Renaissance young artists developed their skills in the workshops of masters, Joe learned his in the everyday world of a working class family. It is rare, for someone of his generation, to have become an artist. But clearly, as his reminiscences show, he was always driven to put pencil to paper, to draw both the real world and the one he imagined.

Lucky for him this enthusiasm was encouraged by supportive parents and good teachers. As a teenager he completed a drawing course through correspondence, an anachronism in our day but a testament to his determination to learn art by all means. After foundation studies at Dawson College, he found himself at Concordia University at a time when Montreal’s contemporary art scene was burgeoning. The internationally renowned painter Guido Molinari was one of his teachers and an inspiration; surprising at first glance because Molinari’s geometric-abstraction could not be further from Joe’s realism. But from this important artist-teacher Joe learned to understand the beauty of form, whether Modernist or High Renaissance in origin, and to recognize its transformative power. As Joe explained, Molinari opened his mind to the freedom that is art.

Today, as for the past two decades, Joe devotes much of his time to teaching. At Dawson College his students are those planning, like he once did, to continue their Fine Art studies at university and beyond. From him they acquire the rigorous training necessary to maturing as professional artists, lessons that include the ability to understand and critically assess visual art, not the least being one’s own. But his creative life involves more that making art and teaching it. As director of Dawson’s Warren G. Flowers Gallery, he plays a pivotal role in bringing art to the Dawson community and the public. Organizer, negotiator, problem solver, idea maker.

These are qualities of both a good gallery director and a good teacher. And if this, with family too, were not enough to keep him occupied, he also dedicates time to the study and collection of antique Oriental rugs. This seems an unexpected departure from the aesthetics of his personal style but then one comes to see the thread that joins together the schooling at his mother’s side, the formal training by Molinari, and his innate love of drawing. The controlled hand and eye, the inquisitive imagination that have been essential to Joe Di Leo’s calling to art since a child, transfers easily from paper and canvas to textile, and back again.

Anna Carlevaris is an art historian and a professor at Dawson College.