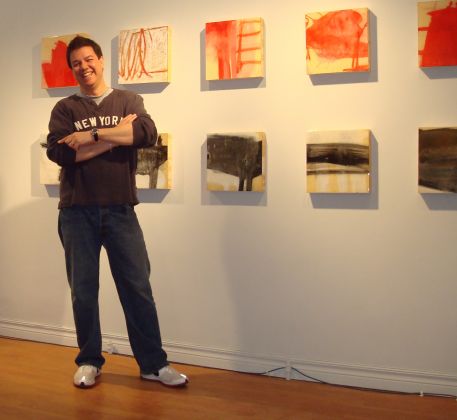 Many of us struggle to find our path in life, but Frank Caracciolo always knew that he would become an artist. “My personal dialogue with the medium of paint first started when, as a child, I made a colourful finger-painting for my grandmother to hang in her house in Brooklyn,” he reminisces.

It is common for artists with visions of international fame to move to New York. Paradoxically, since 2002, this Brooklynite has settled in his wife’s hometown of Montreal to pursue his career and to raise their two young boys. The cosmopolitan artist is somewhat nostalgic when reminiscing about his lifestyle in New York. He explains that he has had to shift gears to get in synch with the markedly softer vibe of Montreal. He admits that while parachuting into a new milieu can present its difficulties, his New York-style hustle and can-do attitude open many doors for him in his new-found city.

Dressed in black on black, he looks like the stereotypical urbane artist. Meanwhile, his abstract artwork defies his neutral exterior with a high-octane groove of its own. His repertoire features paintings where oil and acrylic media meet in displays of long, persistent brushstrokes: curt, strong lines and uninhibited drips and splashes over smudgy surfaces. Unpredictable, and seemingly random, his paintings appear as though they happened by circumstance and not by design – like the lucky survivors of a tornado having hit the artist’s studio. But, behind the deceptive caprice of these canvases is the method of a classically-trained artist, who has landed solidly in the niche of Action Painting.

Caracciolo’s chosen genre finds its roots in the artistic milieu of the 1950s New York, spearheaded by legendary painters Jackson Pollock, Williem de Kooning, and Franz Kline (the latter being the most obvious influence on Caracciolo’s work). The school of Action Painting is based on the ideals that a painting is merely the residue of the physical process of applying paint to the canvas, and that brushstrokes and surface applications become entities in themselves. Its signature technique is a highly physical one, where paint is dribbled, splattered and literally thrown against the canvas, with resulting strata sometimes scratched to reveal the ghosts of previous layers.

The question begs asking: Is there something about New York’s depersonalizing, big-city reality that compelled the first generation of Action Painters, and now, Caracciolo to unleash their artistic psyche in such a visceral manner? “Action Painting lends itself to the interpretation of the flux of the metropolis,” the artist responds. “Just as it is difficult to predict what will happen in the city, it is hard to know exactly what will emerge from a blank canvas. In many ways, it is an instinctual experiment.” Artistic inspiration can present itself in many places – dark and bright; old and new. Like most other artists, Caracciolo’s vision surely originates from the murky realm of the subconscious, but it is also fuelled by the familiar backdrop of the city: a gritty street-corner wall, the grate atop a subway station, peeling paint on the side of a bridge. Any surface becomes his muse, ready to be translated into dynamic smears and strokes of paint.

An installation of one hundred canvases, titled Eye Candy (2008), looks like the prismatic dissection of a kaleidoscope. Bold lines and colour-drenched forms intersect and mingle to create unyielding visual tension. Caracciolo admits that abstract art can leave the uninitiated struggling to decipher non-figurative forms and searching for literal meaning. Is he offended by viewers forcing figurative representation where there is none? “The untrained eye looks for narrative expression and responds to the mood that a painting evokes. For me, it is about the play of negative and positive space, the visual dynamic that forces the eye up and down and across the canvas,” Caracciolo explains. It would seem that appreciation for abstract art is often an acquired taste developed by repeat exposure to the nuances and subtleties that make it a fine art. He maintains that abstract art is not an elitist exercise and likens it to jazz music – while not everyone understands its esoteric elements, it still holds wide audience appeal.

Caracciolo’s paintings have caught the eye of independent art connoisseurs around the globe and have landed in private collections as far away as India. He offers that groups of like origin will respond to symbols and icons in a similar manner, but individuals are influenced by their personal realities. His relocation to Montreal has caused him to examine his own cultural identity, as more and more Montreal Italians enter his sphere and bring him closer to his Italian heritage. “This could never have happened in New York, where ethnicity is filtered through the American melting-pot consciousness,” he contends. He attributes his cultural awakening, of sorts, to the infectious pride for all things Italian that his new acquaintances so openly demonstrate. As his Italian vocabulary expands, he gives some of his works Italian titles, such as Tra Noi [Between Us] (2009), a mixed-media series acknowledging the push-pull of power and submission between artist and medium; and Ancora [Again] (2008), whose undulating, painterly forms symbolize relentless artistic drive.

The artist notes that his new surroundings in Montreal have encouraged a mellower palette. “I find myself transitioning from darker colours to brighter hues and sheerer layers,” he reflects. “It feels right – for now.”

It will be interesting to keep an eye on Frank Caracciolo’s work and to see how his newly-adopted city and more-Italian outlook will continue to affect his artistic sensibility.

Loretta Di Vita is an art aficionado and an expert in business etiquette.