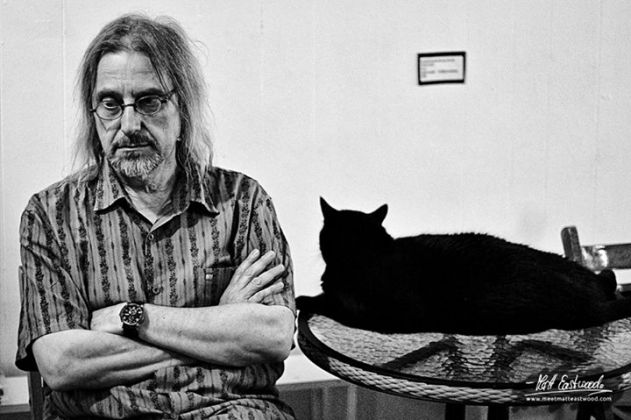 Sometimes I have to laugh.

I’ve got three dollars in my pocket.

There’s a blinking phone message from my country music pal reminding me that his show is tonight. It’s at a smoky joint full of unshaved loudmouths and their giggly girlfriends with too much makeup clutching beer glasses smudged with lipstick all shades of red. This besotted adventure is not possible with my current worth, because three dollars will not get you much in this world. Maybe a plain coffee sitting here with the donut people watching the flashing store sign. I’m wearing clothes ten years old; four girlfriends, five jobs, two cities, and a full head of hair ago. I followed my heart here and now the little weasel’s run off, probably with Cupid. The two of them on a pixie booze and sex binge on a Caribbean cloud somewhere. It’s not fair.

I’m walking home, trying hard to be invisible in the bright lights of the main drag. Windows full of clothes and shoes – sometimes I stop to read the restaurant menus and maybe stare at the table of whoever’s sitting by the front door. 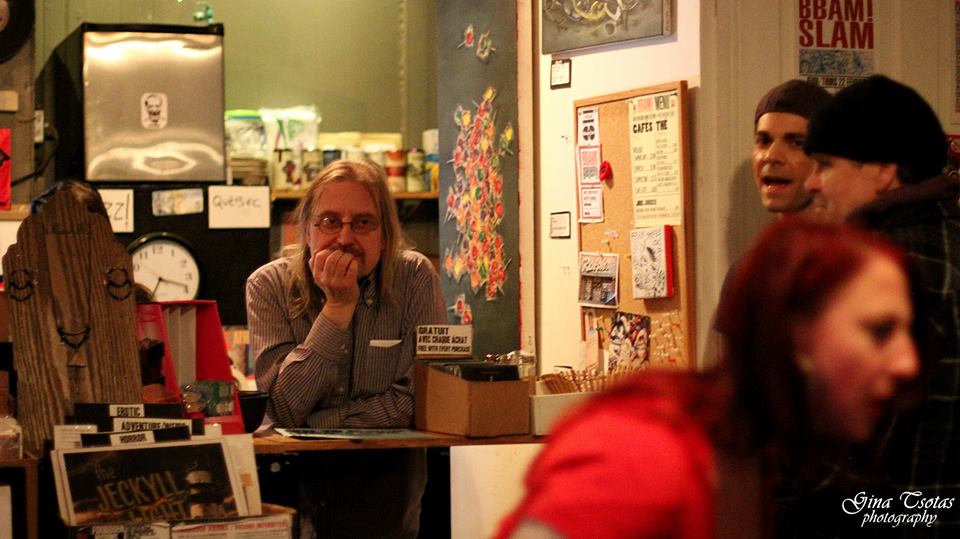 I almost bump over the panhandler squatting in a doorway. Paper cup with a couple of pennies. I get a look at his face. God, I know him. I pull whatever I have in my pockets and throw it in and hope he didn’t see me. I’m busy watching my life fast-forward in my head. Maybe I should scout out a spot for myself. Famous poet. Give me a dollar. It would be a catchy sign.

Life’s pretty finite, after all. Maybe there is re-incarnation. Tell that to this guy I knew: ex-punk drug addict somebody pushed off a rooftop. He always had a big mouth. Me, I don’t want to cause waves, thank you very much. This money thing is dripping acid on my stomach. It’s a tapeworm sucking back green out of every pocket. It’s the cost of living; the price to pay to get a shot at the bottom rung so I can start climbing the ladder to success.

But now, picking out the books and CDs I’ll be selling secondhand tomorrow, I wonder if my literary romance has just been a $2 Scratch-and-Win card. You’re sure this is the sign, you are one pull away on the slot machine … clang clang clang lemon lemon lemonbing bing bing bing five dollars 16 quarters, 20 nickels… Maybe this is the day the treadmill stops. Maybe nobody really wants to read my books. Maybe nobody really wants to hear my music. It’s days like this I wish I drank more. I could sit with my red-nosed buddies talking about the same thing for days on end … muttering and complaining … longing for the good times … re-living the triumph, that one moment in 1977, or maybe 1982 when the spotlight fell, the reviews were good and hey, I’m not a liar … here’s a clipping I’ve kept in my pocket, see…

That’s why I hate bars. That’s why I hate drunks. Yesterday happened already. I can’t change it. Might as well forget it. I try to, anyway, but time folds into itself like accordion paper … years squished together … all sins equal and simultaneous…

Trouble is, of course, I don’t have any friends I could sit and drink with even if I wanted to. I’ve floated through life in my own private bubble all these years and now that it’s burst, well, here are my demons, clutching tightly at my legs, pulling me down into fear and realization…

You can learn a lot from history, but what will history learn from you?

We had been together years ago. That would never happen now. It was one of those things – an odd notion that a moment’s indiscretion was a future to build on.

“Well, you know, it was fun,” she raised an eyebrow, bemused at the thought. “But you probably read more into it than you should have, I mean, the premise of our relationship really wasn’t strong enough to grow beyond its natural cycle…”

She slipped a hundred dollars into my hand, “Good luck.”

The first thing I did was buy some gum. It’s one thing to smell bad, it’s another to have bad breath. 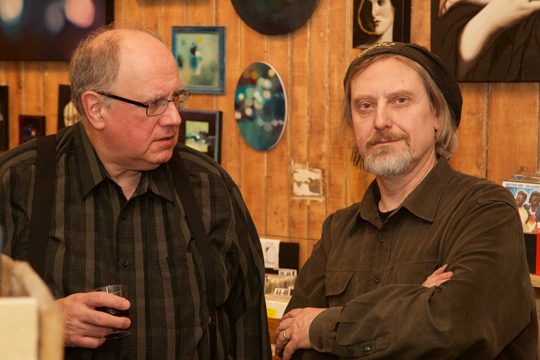 The girl at the talk show asked if I had any more gum. I fished out one of the sticks for her. I guess the make-up looked alright. I don’t know why I couldn’t represent myself as a pasty-faced writer, which, after all, is what I am. I didn’t want to look too healthy; people might think I had money.

I knew my window of opportunity was brief. If I wanted any of the food in the Green Room I had to time my assault on the tiny sliced sandwiches and assorted fruit while everyone fawned over the real celebrity; a minor TV actress riding a second wind of infomercial celebrity.

I tried to act relaxed when one of the assistant-directors came in. I sensed a slight hesitation in his stride as he reached for one of the grapes … it might have been odd that most of the sandwich platter was gone. The Green Room had barely been open five minutes.

My part in the proceedings went well. I read a poem. My pianist ran through a quiet jazz blues. The audience of elderly pensioners and middle-aged women applauded politely. Their treasured has-been actress would soon extol the virtues of indeterminate kitchen utensils.

The host, mostly an impenetrable sort, was always enthusiastic about my appearances. As we faded to a commercial, he leaned over to ask for some gum.

For lunch the next day, I ate the rest of the Green Room sandwiches

I’d smuggled out in my briefcase.

I had ninety dollars and six days till my next pay cheque.

I’m sitting backstage in the dressing room of a famous rock group. It’s a beautiful thing when you’re successful. There’s lots of food spread out for those anxious snacking moments before showtime. There’s cheese from countries I’ve never heard of and crackers and kiwis – there’s always lots of kiwi fruit. Kiwi must be a status thing.

The one nice perk about being me is that I’ve become a bit of a mascot for some of these rock people. They like to have me hang around and talk about the good old days that I hardly remember or even care about … the obscure footnote characters and twice-told tales. I guess the ’80s must be like Frontier Times or something, with me as a living museum piece.

“Must have been different when you were on the road, eh?” says the lead singer guy, Bob or Billy or whatever his name is.

“You got that right,” I answer. “We used to ask for bottled water and they’d get us that distilled stuff for humidifiers or something.”

His manager comes over; short burly type, no hair, big nose. We’re old friends. Sharing bunks on dilapidated tour buses, hoisting gear for bands who got maybe a bag of chips and five beers backstage. Old road guys. You can put us in suits but we always got a pocket with a stinky sock in it.

He points a half-eaten carrot stick at me, “You should’ve stayed at the record company. You’d be a VP or something now. You broke the old man’s heart when you left.”

“You looked good on TV. That piano player’s HOT!” He started poking his finger at me. “You should get some better clothes, seriously … that’s the same jacket you had ten years ago. I can get you something out of their wardrobe … these guys wouldn’t miss it…”

We ended up in the catering room, chowing down on some gourmet feast their private chef personally set for us. I smelled a lot of garlic. My pal gave me a wink, Italian style. “There’s a lot of people keeping an eye on you. Don’t let us down.”

On the subway going home, I start to stretch out a little bit in the new jacket he gave me. It fit pretty good. Maybe my luck was going to change after all.

I popped the last stick of gum in my mouth. What is it with these lame rock bands and their garlic?

Ralph Alfonso is a beatnik jazz poet, musician, publisher, record label owner, designer, and art gallery owner (BBAM! Gallery Montreal). He has published five music CDs, two books, and performed all over the world. A book of his punk photography will be published in 2018.

“Famous Poet. Please Give Me a Dollar” also appears in People, Places, Passages: An Anthology of Canadian Writing (Longbridge 2018). 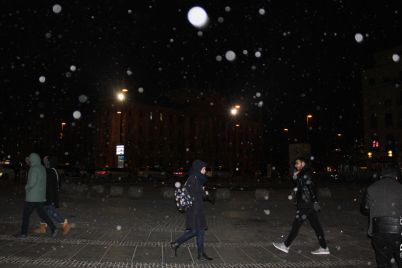 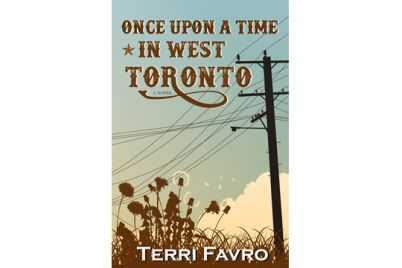