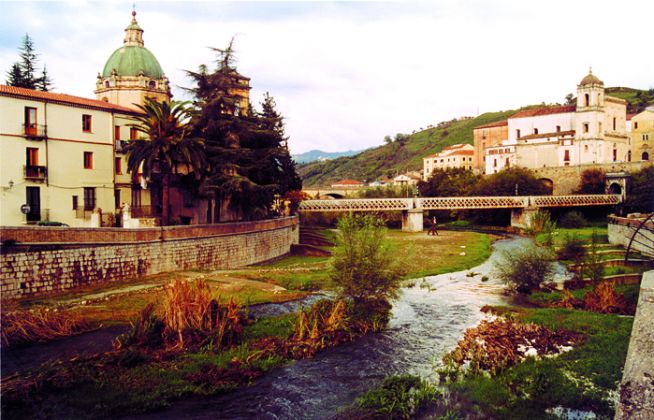 Pulling in, we spot the “Calabria Mia” plaque fixed on the brick façade of the old train station. As we descend from the train, the ferrovia employees scramble to offer their services, each trying to outdo the other with answers to our questions. There is always time for small talk. Antonio, wrongly guesses we are from Latin America. He insists we must be from the “Ki-a-pas.”. “No, my parents are from Calabria,” I reply. Antonio refuses to believe this. I wonder, am I a straniera here too?

Una mattina mi son svegliata ed ero a Roma. Chants of “Fuori la guerra dalla storia, Fuori l’Italia dalla guerra”  kept protesters in step. Red banners were everywhere – and so were the communists, the socialists, the unions and everyday people. The “Women in Black” carried their paper “hands of Fatima,” peace symbols of the prophet Mohammed’s daughter. “Bandiera Rossa” and “Bella Ciao” competed for attention, as I raced to get the story for the “Canadian” audience. Sixty-thousand paced through paved and cobblestone streets, weaving around corners of Roman, medieval, Renaissance and baroque architecture. I was a spectator – witnessing for the first time the fervent left of an Italy I had only read about. I was a participant – part of the same social movement that brought this Canadian to the streets of Porto Alegre, Johannesburg and Quebec City.

This is the Rome where I wanted to be. The city of social protest, where right-wing national immigration policies were formed, where opposition to the European Social Forum in Florence would create a national scandal, and where I was going to document it all, pen and audio recorder in tow.

But after five hours of walking, all I could think about was food. Forty-five minutes later my partner and I reached the tavola calda near Termini. It was the site of a more familiar Rome.

“Excuse me, this is a non-smoking section. Could you please stop smoking?”

“Nobody listens to that sign, I always smoke here,” the man replied, and then he began his diatribe, throwing strange adjectives in our direction.

“No-globba, no-globba. These are the no-globba, the pacifists who shoot with their words,” he said referring to us.

“It’s a question of human rights. That’s why there are laws, to protect us.”

“Where are you from, who are you to tell me what to do in my country?” he continued.

“I’m Italian, too. Do you want to see my passport?”

“Nowadays a passport doesn’t mean anything. Show me your papers.”

“With or without papers, are we in a democratic country or not?”

“I don’t care about democracy, I’m a fascist.”

The hands of the restaurant manager went up. His mediation lasted until the scolded smoker left the restaurant. Theatre curtain now drawn, we sat down to eat.

Fast-forwarding the day’s events, I pondered the strange adjective used by “Mr. Fascist,” also recited by some participants in the march. It occurred to me that what sounded like “no-globba” was actually “no-global”, the term adopted by Italians but coined by “No Logo” author, Naomi Klein. Our very own Canadian has become an international symbol against corporate-led globalization.

The last forty-five minutes of our journey “home” were spent on the Number 5 tram for Piazza Girani. Fellow stranieri occupied the train seats. The tired faces of India, Latin America and Africa met mine on the rickety ride through Rome’s zone popolari. Filthy, graffiti-stained 50s apartment buildings spilled along the avenues, choked by overflowing garbage bins, until we hit my neighbourhood – Centocelle – the so-called Bronx of Rome.

A surprisingly warm late-autumn breeze welcomed our descent from the tram. Another short walk from Piazza Girani would lead us to via dei Glicini and the six-person apartment stacked with the Signora’s clutter – extending from the four closets in the bedroom to the bed in the kitchen. Numbed by exhaustion, we made our way to our rented room and a well-earned good night’s sleep. This was one of many similar days to come.

So much for the city of social protest. Instead, we discovered a city within many cities: a city where traffic is re-routed upon the discovery of a new “archeological treasure”; where “accordion” buses are purchased but not used, as they cannot wind around narrow street corners; where centuries of competing perspectives have produced an undecipherable urban plan; where the only way to survive is to adopt the running philosophy – ma chi se ne frega(who cares). This is not where I wanted to be. With dozens of hours of interviews in hand and a participant in three major demonstrations, it was time to head south, this time to the city that hosted the 50,000-strong protest against the state repression of social activists. Out of Rome and into Cosenza – not to document, but to experience.

“Aqua minerale, panini, birra, coca – qua; birra, panini, aqua minerale – qua,” sang the panino-man in the second-class train corridor on route to Calabria. The charm of the Italian railway system plots full-steam ahead, although the revised fares in Euro currency will eventually slow you down.

The panino-man’s refrain was interrupted by a cabin neighbour. “Sei canadese?” she asked. “I wouldn’t have guessed,” she continued. “Uh, grazie,” I fumble. “Parli molto bene l’italiano,” she said, which usually means they can’t figure out my accent. The ring of the cell phone stole her attention, as mine turned to the window and the looming landscape. The sun rising over the fog revealed the scorched peaks and valleys of Calabria and its deserted stretches of coastline. Soon after, we arrive in Calabria’s cultural capital – Cosenza.

Pulling in, we spot the “Calabria Mia” plaque fixed on the brick façade of the old train station. As we descend from the train, the ferrovia employees scramble to offer their services, each trying to outdo the other with answers to our questions. There is always time for small talk. Antonio, wrongly guesses we are from Latin America. He insists we must be from the “Ki-a-pas.”. “No, my parents are from Calabria,” I reply. Antonio refuses to believe this. I wonder, am I a straniera here too?

After checking in at the hotel, we venture out into the Old City. The morning rainfall brushes a gray-blue sky over balconies with potted geraniums. Wood-burning stoves raise white clouds from the smoke stacks on terracotta rooftops. One, two and three-story houses are stuck side-by-side on zig-zag streets. Patches of broken stucco unmask gray stone and red brick walls, stained yellow by the sun and green with humidity. The sometimes cobblestone, sometimes sunken-asphalt steps, lead to the house with la fichuzza sprouting through the stone wall; fig branches brush the wet clothes freshly hung on the line. The winding wet path carpeted with crimson leaves shouldering the olive-green hills leads to the summit of the old city and site of the medieval castle.

We make our way through il corso. Unlike other main drags, there is no Benetton here. In the recently renovated centro storico, mahogany doors frame the various shops. There is a bookstore, a cultural centre, caffès, restaurants and La Stanza del Poeta (The Poet’s Room). Franco, the “poet in residence,” founded the reading club years ago following a local poetry contest. His calabrese and Italian poetry book is already out of print, he tells us; he has given away all the copies.

As evening approaches, the amplified sound of ora pronobi grows louder as we near a church. Women in black shawls kneel for six o’clock vesperi. Sacred sounds overlap with the screeches of Vespas and rhythms of la tarantella coming from the street vendor’s stall next to the Christmas craft market.

We make our way through the outdoor craft market lined with stands of wooden presepi, miniature saviours, hand-crafted ornaments, plug-in lights, and cotton candy. The smell of roasting chestnuts competes with the aroma of pizza made in a wood-burning oven served in the gazebo decorated with Christmas glitter. A waitress is raising bestieme about the restaurant owners – her parents – for refusing to take her advice about not using tape to fix shiny, plastic, red and green beads onto the glass walls of the gazebo: “I told them they wouldn’t stick, pero loro, du-ri!” I smiled with complicity, as she served our meal.

Early December and our excursion is gradually coming to an end. A zampognaro decked in hiking boots, suspenders, mountaineer hat and his zampogna greets us at the bus station. He gives us a demonstration of his bagpipe-like instrument. We regret having to leave. The bus will take us to Rome, where we will board our flight back home to Canada.

Thoughts race through my mind. On the night of the prisoner-release party, one of the social activists proclaimed, “They wanted to discredit the movement by targetting the weakest link – the south, Calabria – but they didn’t succeed.”

New hope reverberates in the city where village wisdom meets city savvy; where the old school meets the new; where values are not staged but enacted.

Elvira Truglia is a broadcaster, writer and media activist. She lives in Montreal. e_truglia@sympatico.ca.