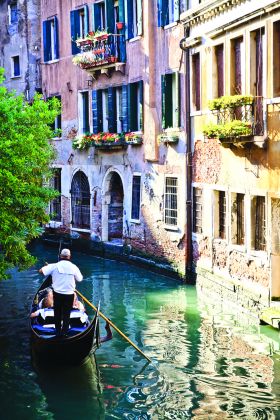 Venice has a reputation as a “serene” city – its surname in Italian is la serenissima (the most serene). Read the daily paper, Il Gazzettino, and you rarely find reports of violence and mayhem. However, a few years ago Il Gazzettino carried a disturbing story of an incident on the island of Lido. It involved an elderly lady on a bicycle who cut in front of a car without signalling. The driver of the car became so incensed that she got out of her vehicle, threw her keys into the cyclist’s face, and knocked her down. The old lady had to be taken to emergency for stitches.

Surprising as this story might have been to readers of Il Gazzettino, there is comfort in the fact that it is not really a Venetian story. The events took place on Lido, one of the long strips of land that make up the sea-side boundary of the Venetian lagoon. Lido, like most of Italy (and unlike Venice proper), has streets complete with cars and trucks and buses (and bicycles). It has traffic!

What the story points to is the vast gulf between Venice and all places – even places in Venice’s vicinity, where road traffic defines the culture. In such communities, people are isolated by their machines. They slide behind the steering wheel and immediately enter a world of power, speed, and aggression. Communication with fellow citizens is reduced to mechanical signals, blaring horns, and primitive hand gestures. All courtesy goes out the window. Even an old lady on a bike is an enemy threatening your space.

Such are the psychological results of our reliance on streets and motorized transportation. For land dwellers, road rage is normal. But Venice is built on water – a soft medium whose soothing influence has all but eliminated the need for confrontations on the canals.

According to tradition, the first Venetians came to settle on the islands of the lagoon to escape Attila and his Huns – the original road hogs. Like all human communities, primitive Venetian society started with the requirements for survival and self-defence. But whereas land-based cultures needed to construct castles, moats, and fortified city walls, the early islanders built no such artificial barriers. The lagoon itself was the mother of all moats. Once the early Venetians became expert in its hidden channels and shifting sand bars, they were well protected against their enemies.

Within this relatively safe isolation, they developed a sophisticated society that was to evolve into the dominant city-state of the Adriatic. As the inhabitants of a great military power, Venetians experienced their fair share of martial encounters, riots, stabbings, and public executions between the Greek columns in the San Marco Piazzetta (not a bad place to die, by the way, given the lovely view of the lagoon). But as Venice became a major cultural centre, its citizens developed a system of rules and conventions that, while not eliminating completely the need for rapiers and pistols, tipped the scales on the side of reason and cooperation.

Evidence of this evolution towards civil comportment is found in the process of electing the doge (the supreme authority), which was fully in place by 1268. The distinctive feature of the system was a strong element of chance. Towards the end of the thirteenth century, Venice numbered about 100,000 people, who were ruled by a general assembly of about five hundred men issued from the great families of the city.

This teasingly repetitive dance between acts of chance and acts of choice is elegantly balanced in its choreography. Of the ten steps, five depend on chance, and five depend on choice. Such structural order points to the strength of the communal mind. It is a system designed to suppress any possibility of individualism and the chaos that accompanies it. At each step, one can almost hear the choral voice:

Step 1. “Fellow Venetians, now that all our names have been placed into the vessel, let us begin by picking thirty at random, for thirty is a goodly number.”

Step 2. “Now we are thirty. But lest this privilege go to our heads, let us place our names in the vessel again and pick nine at random – nine is a better number because it is more like a committee, less like a crowd.”

Step 3. “We don’t seem to be generating enough ideas. Perhaps nine is too few. We need a bigger group. At the first step, we started with thirty, but that was not enough – look where it got us. Let us therefore pick forty this time.”

Step 4. “Okay, quiet down! Forty is obviously too many. Let us, therefore, good fellow citizens, pick twelve by lot. After all, there were twelve apostles, were there not? And are we not a Christian, God-fearing nation?”

Step 5. “We should never have mentioned the apostles. Some of us are developing a God complex. Let us therefore double our number. No, better yet, we’ll double it plus one. That way we’ll have an odd number to break any ties. So we’ll now choose twenty-five.”

Step 6. “Is it just our imagination, or are we starting to go in circles? Every time we get bigger, we seem to have more voices but less substance. We need to prune ourselves down again. Does anyone remember why nine didn’t work? Did we give nine a chance? There were nine Muses, and what’s more inspirational than the Muses? Clearly, nine should work. Let’s pick nine by lot.”

Step 7. “We should never have mentioned the Muses. Now we all think that we’re inspired, and the only thing we can agree about is that truth is relative. What a bunch of hooey! This is the Middle Ages, people! We’re believers! We need a larger critical mass. Let’s up the ante. We’ll pick forty-five this time.”

Step 8. “There are forty-five reasons why forty-five is a bad idea. We need to get back to basics. The twelve apostles theme still feels good to us – it was the most religious proposal we’ve come up with so far. But we forgot that there was one rotten apple at the Last Supper. So let’s throw out the rotten apple. That gives us eleven. We’ll pick eleven by lot.”

Step 9. “Eleven isn’t so bad. We’re starting to feel more confident, but we lack social affirmation. Each one of us needs to choose three like-minded friends he truly trusts. That will give us a total of eleven plus thirty-three: forty-four. Then, continuing with the number three – which is a holy number, and we certainly don’t want to forget the spiritual element – we’ll subtract three from our total. So we’re at forty-four minus three equals fortyone. Clearly, God is leading us to forty-one. We’ll pick forty-one to be our electors.”

Step 10. “We are the forty-one electors. We are the products of the longest and most convoluted electoral process invented by man. And we are confident that we will now choose the next doge and that there will be absolutely no disagreement among us because this meeting has gone on long enough. We want to go home!”

As this election process demonstrates, the Venetians learned long ago how to achieve consensus and how to avoid those interpersonal frictions that might lead to societal discord and physical violence. The spirit of productive social problem-solving was so strong that it dominated Venetian culture throughout the history of this great oligarchic republic to its dissolution in 1797.

Its humanizing spirit is still alive today in the mores and laws of the city. We see it in the regulations that govern water traffic, which are designed to encourage social intercourse. Speed is discouraged on the canals. Article 2 of the water-traffic bylaw establishes a humanizing tone by setting speed limits that minimize noise and water turbulence. The public transit water buses, or vaporetti, may achieve a top speed of 11 km/hr on the Grand Canal, and 7 km/hr on the narrower canals. All other water craft may cruise no faster than 7 km/hr on the Grand Canal, and 5 km/hr on narrower canals.

Not only is mechanical noise suppressed, but human hand and voice signals are encouraged. Paragraph 23 of the water-traffic bylaw specifically states that the use of horns is prohibited “except in cases of danger, when entering intersections, during emergency maneuvers, and under conditions of fog or poor visibility.” Otherwise, pilots of motorized craft are instructed to use hand signals. And rowers are required to use specific oral warnings when entering intersections: if they are heading to the right, they must yell, “a stagando”; to the left, “a premando”; and straight ahead, “de longo.”

It is worth noting that, while the bylaw is written in Italian, these directional words are in the Venetian dialect. The bylaw could have simply stipulated that rowers must yell out that they are going right, left, or straight. But this might have been taken to mean that these communications should be made in standard Italian – an interpretation that would surely have offended Venetian sensibilities. Venetians have been rowing since their ancestors first settled the lagoon. Rowing is as much a part of their identity as their dialect. So it’s natural that when they row, they speak Venetian.

When they navigate the waters, Venetians are encouraged to socialize. This is especially evident on the traghetto (ferry) that carry passengers across the Grand Canal. Unlike the tourist gondola, the traghetto is cheap and therefore available to everyone. And passengers on the traghetto  generally stand. The city bylaw doesn’t require this, but it’s an established Venetian convention that passengers and oarsmen all stand together – a sign that they are at ease and not in danger on the water.

I learned to appreciate this once when I found myself next to a tourist who insisted on squatting as low as possible on the port side of the boat. With each of the oarsmen’s forward thrusts, the tourist’s eyes flashed horror, and she reached to grab the gunwale with one hand and my leg with the other. Had I not made an effort to steady myself, she may very well have pitched me and my wife, who was gripping my arm, into the water. The passengers toward the front did not face this threat because they were all Venetians, and were calmly chatting – which brings us to another example of the civilizing influence of Venetian conventions. By encouraging passengers to stand on the traghetto , local custom fosters a spirit of democratic conviviality. When all are standing, all are equal. No one looks down on anyone else. No one threatens anyone else’s centre of gravity. Conversation is encouraged, friendships are made, social ties are strengthened.

All of this serves to remind us that Venice belongs to the people. There are no bicycles, skateboards, or in-line skates – they’re prohibited by law. Wheels are discouraged, maybe because they’re the essence of the modern machine. Venice is for pedestrians and rowers. It’s a city where people communicate in dialect from house to house and across the waters. A city of feet and hands and the human voice.

Marco Lo Verso is an English professor and dean at
Concordia University College in Edmonton. He has written
on his native Sicily and on Venice. 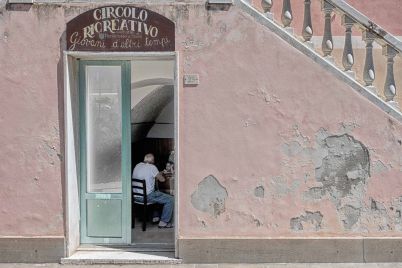 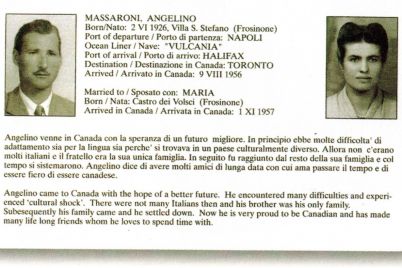