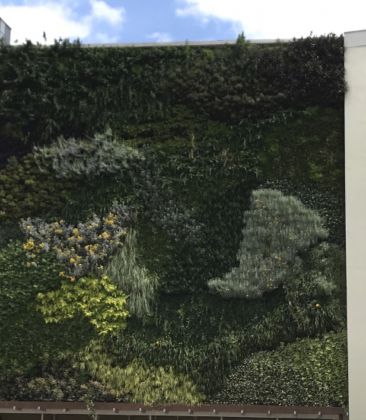 The vertical garden, climbing up the north wall of the Department of Foreign Languages, Literatures and Modern Cultures of the University of Torino, Italy, hosts 29 different plant species. Its function is to absorb pollutant particles from the air. Moreover, it changes its colours according to seasonal blooming. Undoubtedly, it is a lovely example of biodiversity in a place where there are just a few green spaces.

Vertical gardens are considered both an innovation and a good practice that pertains to acts of mitigation both of air pollution and of climate change. However, it is not an absolute novelty, particularly if we think of the experiments conducted by Viennese-New Zealand architect and artist Hundertwasser back in the 1960s. Hundertwasser integrated trees in his buildings, letting them sprout from windows and balconies. He created a completely new idea of a city block, incorporating both green plants and grass all around the walls and on the rooftops of his apartments, in central Vienna as well as in the countryside. Examples of Hundertwasser’s work can be seen here.

In his projects of buildings-cum-trees, he defined trees as “good neighbors” or “tenants,” with equal rental rights as human tenants, although the benefits of such a friendly co-habitation are all for the latter. Tenant-trees pay the rent through oxygen emissions, freshness and shade in the summer, safeguarding the planet, in a full show of constant beauty so as to satisfy our human “chlorophilia,” as Robert Pogue Harrison writes in Gardens. An Essay on the Human Condition.

Hundertwasser promoted the right to have a window and the duty to plant a tree: this was an exemplary intermingling of social and abiding justice, as well as environmental justice, that we have learned to appreciate, particularly during the current Covid-19 pandemic. To be able to open a window onto a pot full of flowers or onto a tree standing in the middle of a boulevard is both a consolation and a satisfaction – more so for those who found (or continue to find) themselves under lockdown in a small apartment in the outskirts of town.

City streets and rooftops should go green, Hundertwasser believed. Perhaps we have already entered the era of Hundertwasser’s dream. After all, rooftop gardens are undoubtedly the new trend all over the world. They are not only an ecological solution, but an “eco-systemic” one.

In Margaret Atwood’s Maddaddam Trilogy the notion is taken to extremes. Rooftop gardens are a utopia in the middle of a raging global pandemic that was produced in a laboratory in order to destroy humankind and replace it with a new species of humanoids created from genetic manipulation and splicing. Among the survivors, however, there are not only these “crakers,” but also activists who belong to an ecological sect, God’s Gardeners, who survive thanks to their biological and biodiverse vegetal productions, recycling, and composting – all practiced on the rooftops of what once were wellness clinics.

The first book of Atwood’s trilogy was published following the Avian Flu and SARS outbreaks (1997-2003). I was a visiting scholar at the University of Toronto in those years. I remember big posters advertising how people should wash their hands and how frequently. In the toilets new hand-drying machines were installed, allowing people to insert their wet hands in a space that produced hot air, thus avoiding any contact. In Atwood’s novels God’s Gardeners wash their hands frequently, and use home-made and natural soaps and detergents.

In those years the skyscrapers in downtown Toronto were topped with huge screens blasting advertisements night and day, exacerbating consumerism, and perhaps suggesting that Atwood’s fictional society was already completely realized. More recently, those screens have disappeared, and who knows that more hanging gardens might instead replace them. Literature and art’s predictive capacity cannot find its realization only in catastrophes and dystopias! The hope is that the predictive value of literature and art might work also for utopias.

God’s Gardeners seem to actually put into practice the teachings of Italian artist Michelangelo Pistoletto and his idea of “Third Paradise” – a third era in which technology is at the service of humankind in order to maintain and ameliorate the environment in which we all live by fully respecting nature and non-humans.

The vertical garden on the wall of the department where I teach and work is an extraordinary homage to biodiversity. It can also hint at a new model of the university, where disciplines might be “cultivated” according to an integrated and relational system – according to a “gnoseosphere” based on proximity rather than on distancing. The term “gnoseosphere” is my own pun, indicating a new cultural matrix, vaguely echoing the notion of “noosphere” by Pierre Teilhard de Chardin. Disciplines would not be fractured and “partitioned,” as Amitav Ghosh claimed in Climate Change and the Unthinkable, quoting Bruno Latour, thereby also evoking the partition of India and Pakistan, and thus stigmatizing that new national border.

It is at PAV (Parco Arte Vivente), an urban garden, an open air workshop, an isle of green biodiversity in the heart of a very populated area in the city of Torino that our students encountered art exhibitions from India. Here, we listened to performance readings of pages by Primo Levi. We heard words of wisdom by scientists and intellectuals, we saw artworks by international artists – in a reciprocity of exchanges of oxygen and light for the mind.

Hopefully, a new ecological awareness will emerge from this, thanks to environmental education and sustainability; it would be interdisciplinary and complement the hard sciences and the humanities; it would encompass new technologies and human values, art, and shared knowledge; and it would include enclosed spaces (our classrooms) and open spaces (such as the PAV). Hopefully, a new garden of culture might be created, made up of a pluriverse of knowledge directed at safeguarding our planet and us included. For as Covid-19 is showing us, the planet can do without us.

Carmen Concilio is Accenti editor at large and a professor in the Department of Foreign Languages and Literatures and Modern Cultures at the University of Turin, Italy.